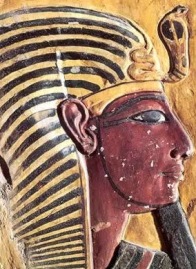 I have read several commentaries on Joseph’s summons before Pharaoh in Genesis 41. Most, understandably, focus on the main message of Joseph’s God-given gift of interpretation of dreams. But a few little words in the text also give us some cultural insights into the story.

When the butler concludes his account of Joseph’s abilities, Pharaoh orders that he (Joseph) be brought before him, in order to give the meaning of his perplexing dreams. Then verse 14 tells us: “So Pharaoh sent for Joseph, and he was quickly brought from the dungeon. When he had shaved and changed his clothes, he came before Pharaoh (NIV).”

Why shave?  Several commentators (Ellicott; Jamieson-Fausset-Brown; and Cambridge) discuss the fact that facial hair was alien to Egyptian culture and was the mark of a foreigner, someone in mourning, or men of low social status.  So if nothing else Joseph who has been in captivity must clean himself (changing clothing and shaving) in order to go into the royal presence (Benson: “. . . that decency required it, to shave himself”).  But more likely he is removing from himself the stigma of servant or foreigner. Fried has suggested that he may even have been taking the physical attributes of a priest, or at least what Egyptians would recognize as “priestly.” He is here acting as a messenger of God.

Kyle Dunham expands on this point of view with the reflection that: “Joseph is later given what is likely an Egyptian cultic name, Zaphenath-Paneah (possibly meaning “The God Has Said: ‘He Will Live’”), and he is wedded to the daughter of an Egyptian priest (Gen 41:45).”  He is therefore, accepted as a prophet and priest by Pharaoh.

Okay, allowing that the beards worn by upper class Egyptians were fake ones (look closely at many of the pictures and statues of pharaohs and you will see that the strings and ties are included in the image, a style which reflects the god Osiris in the afterlife), a clean shaven man would be one who was ritually pure, and it was in this way that Joseph comes before the Egyptian king.  He is not speaking for himself, he is the spokesman of the God who is greater than those of all the assorted false-bearded priests (of Osiris or otherwise) who have already failed to explain the sheaves and the cows to Pharaoh.  He is a priest in the true sense (even by Egyptian standards – the most common priest term is “pure one” (w‘b) according to Fried). He is speaking the pure truth, of the true God.

The visual claim by Joseph, therefore is “I speak by an authority greater than myself, your priests, and even your gods.” Stopping to shave seems well worth the effort to make such a powerful point.  And the words themselves backed his claim, and Zaphenath-Paneah became great in all of Egypt, and in so doing saved the people of God.

So how about us?  Do we put forward a pure image to those we meet?  Do we take the time to think about how we conduct and present ourselves, and how that reflects on the God we serve?