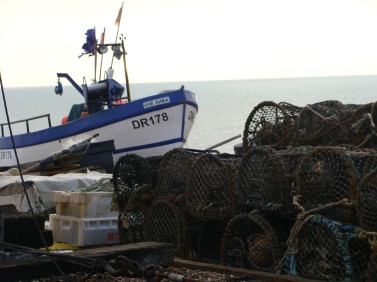 As a child the idea of the sea was fascinating.  It was a place of Treasure Island, Pirates, and Mermaids.  Children’s literature painted a picture of this “other world.”  I was in awe.

Then, while I was still small, we went to the beach.  It was amazing to a small boy that this great body of water seemed to appear as we got near the coast.  It not only appeared but loomed over the horizon.  Yes, as an adult I understand that the sea by definition is at “sea level” and is “below” the surrounding land, but the illusion is nonetheless impressive to a small child.

Later I had the opportunity to go on small boats out into a bay.  This experience gave a greater insight into the deep. The vastness of the seaward went on to the horizon, it was “all” there was in that direction.  Sheer size added to the teen-aged awe of it all.

Then I went to sea!  As a young man, I sailed the Pacific.  This was no day excursion on a pleasure craft, but an extended voyage on a warship.  The sea was indeed “endless.”  In all directions, there was Samuel Taylor Coleridge’s “Water, water, everywhere . . . . ”

Then came the storm.  Yes, the majesty and power of the sea had already been imprinted in my psyche, but now WOW!  Waves several stories high, the sense that the entire world was in motion.  The exhilaration and terror (though the later tempered by confidence in the vessel, but terror nonetheless).  I was glad the storm ended.   We were still afloat, and all was well.

When Jesus was on the Galilee, a storm struck, and his seasoned fishermen friends felt that same terror.  Yet, even with all the tremendous power of sea and wind, there was a force greater.  Jesus arose in the boat and said “Peace, be still.”  The sea and wind obeyed.

I love the sea. I am still in awe of the sea.  I respect the sea. I have seen the deep when it has been placid, and when it has been angry.  It remains the greatest power on the Earth in my opinion. But it pales to God – in its power, in my love, my awe, and my respect.

Psalm 107:23-31 (KJV) captures this: “They that go down to the sea in ships, that do business in great waters;  These see the works of the Lord, and his wonders in the deep. For he commandeth, and raiseth the stormy wind, which lifteth up the waves thereof. They mount up to the heaven, they go down again to the depths: their soul is melted because of trouble. They reel to and fro, and stagger like a drunken man, and are at their wit’s end. Then they cry unto the Lord in their trouble, and he bringeth them out of their distresses. He maketh the storm a calm, so that the waves thereof are still. Then are they glad because they be quiet; so he bringeth them unto their desired haven.  Oh that men would praise the Lord for his goodness, and for his wonderful works to the children of men!”