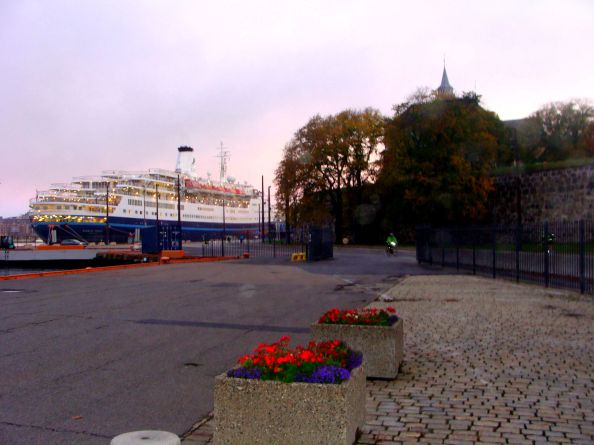 A while back, my wife and I made a whirlwind visit to Oslo in Norway.  We had arrived on the MS Marco Polo before dawn, and were able to make our way into the city as the sun rose.  I spent a half and hour or so taking in the port and Akershus Fortress before heading into town.

Fortress on a Misty Dawn

The fortress is impressive, and as we were moored in its shadow it allowed some great external views before it opened to the public for the day. At the foot of the fortress is a memorial to Norway’s Holocaust victims. I have posted on these in the past.

A monument to the Norwegian Navy is also in the area.

I passed by the Kongens Gate and headed as is our family practice to hard Rock Cafe.  This is very close to the National Theatre (which a a beautiful building in its own right), and is very convenient to the central government buildings. 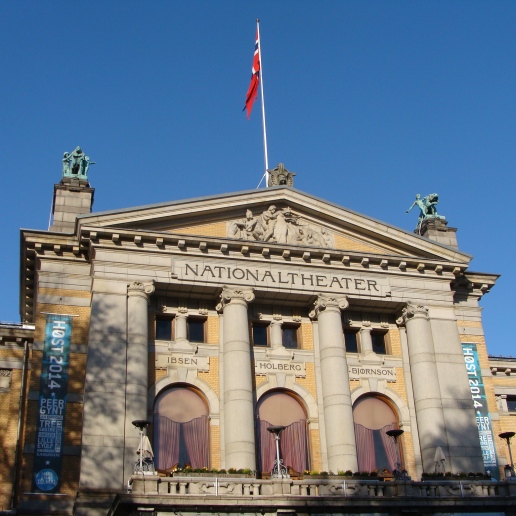 We arrived on the day of a state visit by the prime minister/president(?)  of India to Norway.  The entire city centre was decked with Norwegian and Indian flags.  There were some security cordons in place, and it did briefly limit our (my wife and myself) access to the main thoroughfare.  To kill a few moments after Hard Rock and while waiting for the road to clear, we stepped into the tourist information centre.  We looked around and then departed out a side door rather than the main entrance, just in time to come within metres of the royal car with the smiling queen and Indian officials.  We couldn’t have planned that one.

After our visit to the centre, I headed to the last monument of this excursion, The Scandinavian Star Memorial.

On the 7th of April 1990, a fire broke out on the Scandinavian Star.  As it spread the stairwells became chimneys and the fire became even more intense.  Attempts to cut off the fire only served to spread it, and in the end 159 people died.  The memorial remembers the victims of this tragedy.  Another memorial is the fact that the disaster led to the reworking of the International Convention for the Safety of Life at Sea.

As we only had a morning to take in Oslo, we were very limited in our sites.  It is definitely a place to return to.