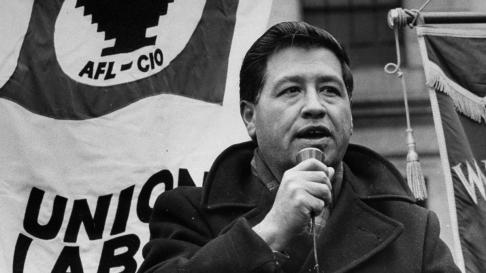 It has been some time since I made a public speaking post. Some of my past ones focused on great speakers (such as Lincoln and Churchill) and how their oratory could help aspiring speakers, teachers, and ministers to become more effective.  Today I will bring our focus onto the trade unionist and civil rights activist Cesar Chavez.

Cesar Chavez was born to a labouring family in the Southwest of the United States. His family faced racism, and economic exploitation and lost their farm to unscrupulous businessmen.  He left school after the eighth grade, and joined his mother as a migrant farm worker.  Despite this harsh start to life he became a union organiser, political activist, and powerful orator.

Chavez’s speeches were direct, and in the language of the people.  This latter point is important.  It was not only that he spoke in Spanish and English as his audience dictated, but that he used the idioms and images which his hearers understood. He was once asked why his audiences admired him so much.  Smiling he responded, “because the feeling is mutual.”

In his speeches and leadership style more generally, he promoted education and self-improvement, but not as ends in themselves. Rather, he called on people to be better human beings and connected with them in aspiration.

He said “Real education should consist of drawing the goodness and the best out of our own students. What better books can there be than the book of humanity?”  And, “Students must have initiative; they should not be mere imitators. They must learn to think and act for themselves – and be free.”

The words he used had power.  He called on others to use their words powerfully as well. “Our language is the reflection of ourselves. A language is an exact reflection of the character and growth of its speakers.”  Your identity is in your words!  Whether English, Spanish, in the end it is the choice of your words that reflect your nature.

So what can we learn from Chavez? First speak to your audience, adjust and mould to their needs and expectations. Speak not just to make “your” point, but to help your hearers to find their voice as well.  Thirdly, let your words be true reflections of who you are.