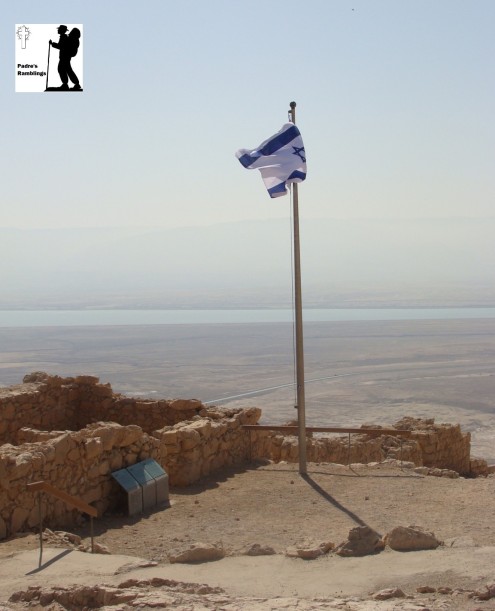 View of Dead Sea from Masada

Masada is a palace and fortress complex overlooking the Dead Sea. It was constructed on a plateau by King Herod; but is most famous as the site of a siege in 73/74 CE when Jewish Rebels made their stand against Rome following the destruction of the Temple in 70 CE.  The Romans eventually broke Masada’s defenses, but the mountain complex has become a symbol of Israeli defiance to invasion, and a reminder of “Never Again.”

We arrived on an August morning, well before noon and it was already in the 40s C.  The area is sun-bleached desert, and rather bleak.  It made the fortress above us seem even more imposing, and the entire place felt filled with history.  Some of the party wanted to take the winding path to the top, but most of us opted for the cable-car. 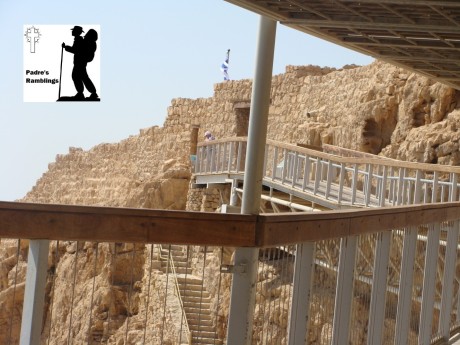 The plateau fortress is huge, and is approximately 600 by 300 meters is size. The cliff walls are relatively sheer and drop between 100 and 450 meters to the desert floor below. The complex has barracks, palaces, defensive towers, and water cisterns making it a formidable defense. 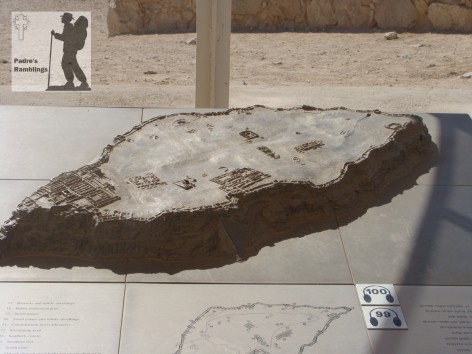 Model and Map of Complex

As in noted it was a hot dry day. This sun drenched place so high above the wilderness below had (and has) a massive need for water.  Herod had huge water cisterns built to take care of this need. Today, there are still water stations available to fill drink bottles for visitors.  Ironically (or at least sadly), I saw a lot of it wasted by visiting teenagers using it for water fights.

Herod had two palaces on the mound, his residential palace/villa on the north of the plateau, and the Western Palace which had his throne room, and elaborate features.  The western Palace was the largest building on the site. 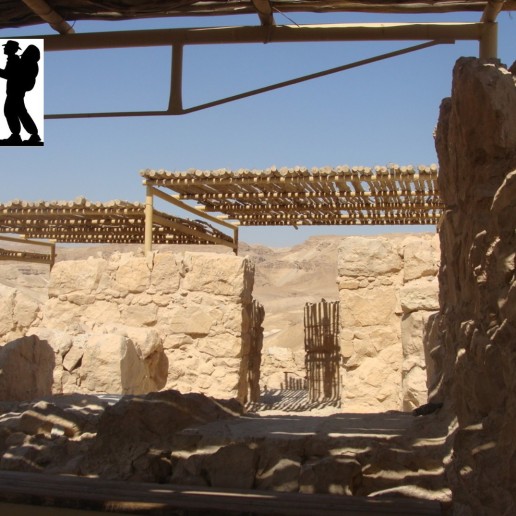 The fortifications, with curtain walls, the sheer drop of the cliffs, and the many watch towers are impressive.  It becomes clear how the nearly 1000 rebels were able to hold out so long during the siege.

But after a long siege the might of Rome did prevail. The Romans using forced Jewish labour constructed a ramp up the cliff and breached the defenses.  It was not the victory they expected however, as when they arrived the 960 defenders had killed each other to defy capture.  The Law forbade suicide, so lots were drawn to determine who would kill his comrade rather than give Rome triumph.

Our visit was over, and the temperatures continued to soar, so we left the fortress and headed to the oasis of En Gedi and the Dead Sea beyond.

One thought on “Exploring Masada”