One of the main travel tips I have always given to disabled travellers is to use the hop on hop off tours where available. Another similar service which is appearing in more and more destinations is Road Trains.  These are generally cheaper than the tour bus options, and have their own share of benefits and weaknesses.

On the plus side, as already mentioned, they are generally cheaper.  They travel a usually shorter route, but also have access to some parts of cities where a bus could not fit (such as Medieval streets).  On the downside they are generally lower to the ground so lack panoramic views, and travel at a fairly slow rate.  That said, they also are more hesitant in traffic to make prolonged photo stops.

The Great Yarmouth service is one which makes a regular circuit of the beaches, and piers of the town.  As Yarmouth is a long sea front it is very convenient to get from one end to the other without worrying about multiple parking places, or making the long foot journey. 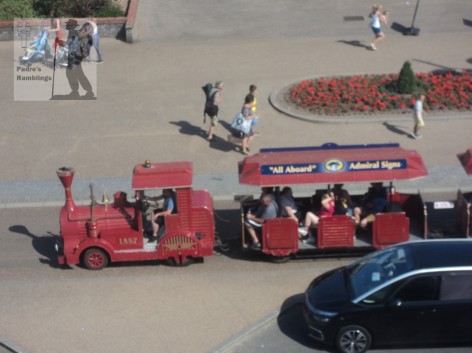 The Road train in Arrecife, Lanzarate is a great little bargain.  It is a Hop on, Hop off service, in the form of a “road train.”  This service began operation only a couple of years ago.  It goes around Arrecife, stops at bus stations, beaches, and historic landmarks, and best of all it costs only 4 euros per person. 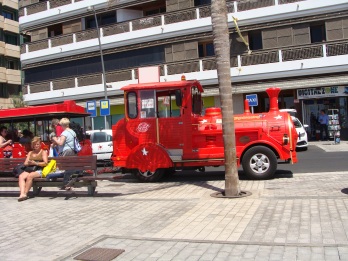 As a whole I find this mode of exploring wonderful, but beware. Not all road trains are created equal. When I made my pilgrimage to Santiago de Compostela we used the road train from Praza do Obradoiro to tour of the city. Okay, we saw the city.  But at what a cost. The tour is over very rugged cobbles, and there is a lot of jarring about. It is so rough in some areas that any photography is impossible. On smoother sections we travelled at too great a speed to take focused pictures. Only on the occasional stop for traffic signals are there any photo ops. The commentary is okay, but is difficult to listen to, accent is only a minor issue, but that it is over a intercom is more difficult to hear. It also has a limited scope of the sites available and spends more time in the university campuses than in the traditional old sectors.  It also is a set tour, and not a hop on, Hop off service. 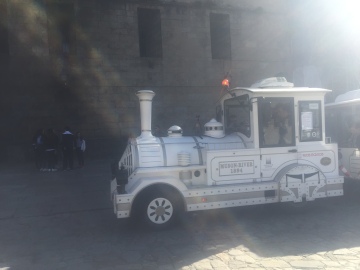 All in all I like this quirky way to explore a city or town.  But it is not the do all and end all, but rather a great starting point to find one’s bearings so that further exploration can be planned.  Do however, give it a try.