[This is a departure from my usual posts. I hope it will still be appreciated by my usual readers, and that it has some usefulness in general.  A couple of years ago, I wrote a few articles and accompanying materials to be used for home schooling in history. The target reader is British KS3/American Grades 7-9. Again, I hope adults will get something from them as well.] 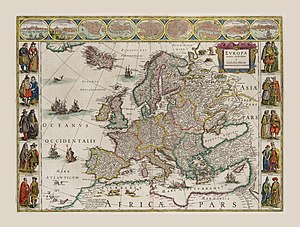 Many people are fascinated by maps, especially old maps.  Whether they are of far-off, exotic places or of familiar places, close to home they seem to catch our interest. They are in many ways a “window on the world” showing us the features of our planet.            But where do these maps come from? We may not always give this much thought as maps have become a very common part of our lives, but they have not always been so.  In the Age of Discovery maps were rare and especially valuable.  Many rulers saw maps as great secrets, and at times even ordered that maps of their kingdoms be made with purposeful mistakes to confuse foreigners or possible enemies.

Early European maps tell us a lot about those times and the Dutch maps are some of the best. They display the new learning, wealth, and power of the Dutch Golden Age. To Europeans, “New Worlds” were being found in the Americas, Africa and Asia and the Dutch, especially the United East-India Company, were taking a lead in these discoveries.

The Dutch soon became some of the best cartographers (map makers) in Europe, and one family, the Blaeus, were among the most important.  Willem, Joan and Cornelis Blaeu seemed to come into map making quite naturally.  Willem, the father of Joan and Cornelis had always been interested in mathematics and science, so in 1594 he travelled to Denmark to study and work with the astronomer Tycho Brache.

When Wellem returned to the Netherlands he set up a globe and map making company in Amsterdam.  It was in this household and business that the younger Blaeus grew up.

Joan, Wellem’s eldest son studied at the University of Leiden, becoming Dr. Joan Blaeu in 1620. He later joined his father’s work in Amsterdam, eventually becoming his business partner.  In 1651, the influence of Joan Blaeu was shown when he became the first printer to become a member of Amsterdam’s Council of Aldermen.

When Wellem died in 1638 his younger son, Cornelis took his place in the business.

Many of the maps in the Blaeus’ early atlases were made from printing plates they purchased from other map makers.  These included maps complied by their fellow Dutch cartographer Jodocus Hondius which they bought when Hondius died (Goss, 10).  The Blaeus went on to produce their own works and Joan Blaeu included the new discoveries made by  explorers like Abel Tasman, the discoverer of Tasmania, Australia, and New Zealand) (Goss, 12-13).  The work of the family was of such good quality that they became the official mapmakers for the Dutch East India Company.  This duty not only included making maps and charts, but also producing written directions for the sea captains and navigators of the company (Goss, 12).

Whether the Blaeus’ work was from their own discoveries, the descriptions of travellers, or from copying the work of others, the detail in their maps is amazing.  One of their maps shows the tiny village of Swaffham Prior in Cambridgeshire, England with two churches.  Most English villages only have one church, but Swaffham Prior has the unusual feature of having two churches sharing the same churchyard.  The Blaeus’ map not only shows this, but correctly pictures them with one having a square tower and the other with a circular one.

The artwork or illumination in the Blaeu maps is not only beautiful, but is also a really useful “primary source” for historians as well.  These illustrations include the flags of the countries shown on the maps as well as the coats of arms of important people, cities and countries.

The Blaeus’ illustrations also show people from the regions covered in their maps. Some of these people are taking part in everyday activities, such as hunting, farming and fishing.  The clothing in the pictures is also quite detailed, and seems to be accurate to the time and places which they show.  Examples include a Polish man with a large mustache and the back of his head shaved (Grand Atlas, 31), people from the Arctic wearing fur-lined parkas (Grand Atlas, 27),  and Chinese officials in colorful silks (Grand Atlas, 213. 218).  Many of these look identical to clothing shown in paintings from those countries which were made at the time.

From a modern point of view the Blaeus’ maps are not perfect, but even these shortcomings are interesting.  Some of the boarders and the shapes of land masses are not strictly correct.  They are, however, very close and may reflect the limits of the scientific equipment of the times. Some of the Blaeus’ illuminations also seem to show their Dutch pride.  Most of the ships shown on the seas of their maps are flying the flag of the United Netherlands.  The pictures of animals from foreign lands are also strange to our modern point of view.  An example of this is the portrayal of a rhinoceros on the map of Congo and Angola in Africa (Grand Atlas, 150).  The animal is shown with an extra horn on the back of its neck. It is clear that the Blaeus were not familiar with such “outlandish” creatures.

Sadly, at 3:30 in the morning on February 23, 1672, the Blaeus’ workshops were destroyed by fire, bringing to an end their marvelous work.  While fire ended their business, it did not close the window on their world which they had opened for us through their published maps and books.

Discussion:  Why do you think that maps were seen as politically important to kings and rulers in the 16th and 17th centuries?

Discussion:  Why might the maps of the Blaeus and other early map-makers be important sources for historians and geographers?

Activity:  Find an old map of your town or city and compare it to today.  What features can you still identify?  Which ones have changed?

Activity:  Draw a map of your neighbourhood.  Be sure to include important buildings like schools, churches, and temples.  You can also “illuminate” your map with pictures of people and activities common in your area.