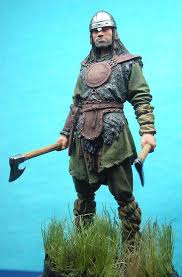 It was the opinion of many that Seymour was born eleven pennies shy of a shilling, while others believed that he had been hit on the helmet a few too many times. Whatever the case, Seymour de Klod was a fierce warrior, if a bit slow on the uptake.

He was a big lad, well over 6 1/2 feet in height and a strong as an ox (or two). He wore rather well dented armour, and preferred an axe to a sword. He was also surprisingly swift for his size.

During the Black Dunes War he had made a name for himself. This didn’t of course stop his comrades from thinking it hilarious to have him bring his lantern close to the camp fire so they “could check if the fire was lit yet,” something he dutifully and proudly did each night. On one occasion he had almost single-handedly sacked and torched a Ralulee village, only to a half hour later turn to his comrades and ask, “Hey guys, is just me or do you smell smoke?”

His prized possession was the talisman he wore on a leather thong around his neck, and which looked exactly like a copper curtain ring. The peddler had assured him that it gave 100% protection against both vampires and trolls during daylight hours. And as he had yet to be bothered by either, he was sure that the 30 gold pieces he paid for it was a shrewd investment.

Another of his amazing traits was that he was virtually immune to all enchantments and hypnotisms. It was not that his constitution was so great (which it was), but rather that the suggestions took too long to sink in to be of any usefulness.

When the wars had ended he found himself an “axe for hire” and took to body guarding, and the settling of the occasional “labour dispute.” Then he fell in with the “sisters.”

Their leader Gwendolyn, had convinced him that they had grown up together in the orphanage. And as there was something familiar about her (they having met two weeks before),  he immediately “adopted” her as his little sister.

See another Sisters Tale No Man Shall Pass