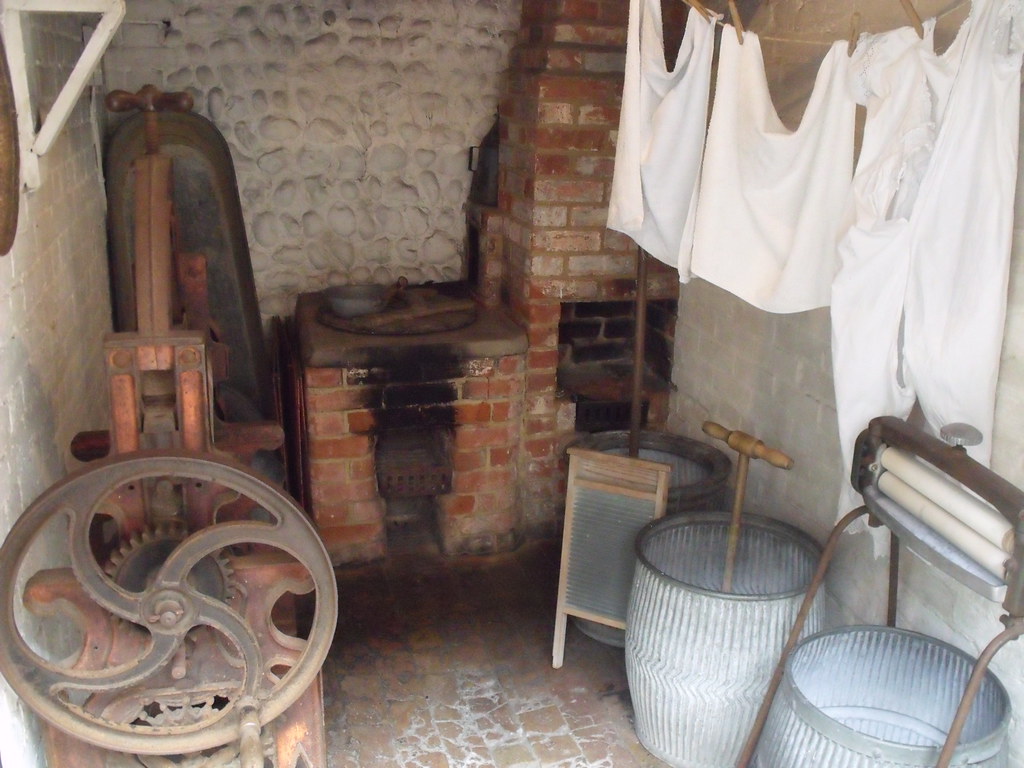 The laundresses had only recently arrived at work after their extra evening off, and none of them was prepared to risk disturbing “The Washer Woman,” even though her absence at opening time was unusual. Fortunately, Mildred had keys to the front entrance and to the cash box, so they began to get on with their daily routine.

Then Dennis breezed in, carrying a large sack over his shoulder. Helen stopped and looked expectantly at the front door, and when her mistress didn’t come through after Dennis, she smiled.

“Brilliantly,” he responded, as she squealed with glee and ran over to him.  She threw her arms around his neck and kissed him passionately, as Thyme and Mildred looked on in confusion.

“You two, move over there,” he said pointing to a space behind the counter. Helen gagged them both, as Dennis bound them hand and foot.  Helen then pulled the keys from Mildred’s apron and unlocked the cash box.  Its contents were emptied into Dennis’ sack, and then Helen turned the sign to read “Closed,” and locked the front door.

The couple then went into the back room, where Dennis pried up the floorboards under Thilda’s desk and pulled out the treasure chest, which was emptied into his hessian as well.

They then made their way back to entrance, Helen wearing Gwendolyn’s best cloak, unlocked the door, and departed into the morning air,  leaving the laundresses sobbing behind the counter.

Dennis’ scheme had a few holes in it. Firstly, he didn’t thing to remove the rope from the pulley. Though it was out of the immediate reach of the sisters. He had also failed to relieve Gwendolyn of her lock-picks.

One end of the rope was still tied to the gate, but the other end was hanging free about a foot beyond their reach. They used Thilda’s bow to catch the rope and slowly coxed it towards them. Gwendolyn grabbed it and tied it to the gate as well.

“Okay, we have the rope and the pulley, but we are at a bad angle,” Gwendolyn observed.

Thilda said, “Help me pick up the barrel staves. I have an idea.”

She then inspected each piece to see which was the most useful. “Gwen, Can you use these to lever the lid off that coffin?”

Gwendolyn placed the boards into the gap and together they kicked them until the lid started slide.

“Careful not the let it fall,” Thilda said,”Just let it slowly slide to the floor on the bottom end.”

The two women struggled, but gravity helped and they were able to get the heavy stone lid to stand upright, as it leaned on the sarcophagus.

“Did they bury him with an axe or hammer?” Thilda asked.

“Perfect,” Thilda replied, “Bring it here, and keep hold of the lid so it doesn’t slide.”

She then began the care fully chip a groove into the bust on the top of the lid. She then went and untied one end of the rope and attached it to the anchor point on the image.

“I see,” Gwendolyn said nodding, and together they positioned themselves on either side of the tomb.

“One, Two, Three.” Both women pushed with all their might an the lid toppled over, and its mass was sufficient to act as a counter weight to the portcullis raising it about eighteen inches.

The women scrambled to squirm under it before anything could go wrong. Thilda easily slid though and grabbed the larger Gwendolyn by the arms to speed her escape.  No sooner had she cleared the threshold, did the knot on the sarcophagus lid give way, and the gate again crashed down.

Gwendolyn muttered some profanities as they dusted themselves off.

Thilda made a quick check that neither was seriously injured. A few scrapes and bruises to be sure, but more their pride than their persons was damaged.

“What do we have?” Gwendolyn asked.

“One lantern, the arse left behind; your tool kit, my bow, and a dwarf hammer; it looks like,” came Thilda’s appraisal.

They made their way into the Guild cellar, and again looked for any thing useful.

“Wait, there are a couple of candle ends in the sconce,” Gwendolyn observed. “They may be useful.” She wiggled them free, and they proceeded up the stairs.

Dennis had removed the wad of twin from the lock on his departure, and Gwendolyn had to gain go through the process of picking it.  It was even harder from underneath, and the candle ends proved useful, as the time it took her was almost novice like in its duration.

At last the bolt clicked, and Thilda exerted herself to push the hatch open, against gravity.  But they were nearly free.

Beams of day light trickled through faults in the roof work of the old building, but it remained largely a world of shadow.

The carefully opened the rear door of the annex and had to blink against the noon day sun. They gave a careful look in each direction, and then as nonchalantly as was possible for two dusty, disheveled women made their way into the street.

Gwendolyn was surprised to see the “Closed” sign on the door to the laundry. “Surely Mildred would have opened up by now,” she muttered absent-mindedly.

The door, however, was unlocked. Pushing it open it seemed all was in order, except for the absence of the “girls.” It was then that she heard the muffled cry for help, form behind the counter.

Thilda drew her dagger and jump onto the counter, only to see Mildred and Thyme struggling against their bonds.

Gwendolyn rounded the counter and began to untie the laundresses, and Thyme burst into tears, as Mildred repeatedly apologised.

“I’m so, so sorry,” Mildred said between sobs.

Gwendolyn intervened, “Nonsense, Milly you have nothing to apologise for.” Gwendolyn eventually composed herself enough to get an account of the proceedings.

Gwendolyn let loose a series of profanities during the tale.

“I am going to kill him, both of them,” Thilda declared as she hugged the still shivering Thyme.

The Sisters Tales are presented in the correct order on the “Themed Fiction” page of my blog. The preceding segment to this one is: Trapped: A Sisters Tale