The expedition would be costly. There was no doubt of that. While there was some silver left after the robbery of the laundry, it would not be enough. Gwendolyn, however, was able to secure a sufficient loan from Bertram at only 250% interest, half his usual fee. “Well, allowances need to be made for family,” he had hissed as he had her sign his book.

Bertram had also secured a few “particular” items for Maya and Breena. Each piece was expertly (if a little skeptically) checked by the respective “sister” upon delivery.

Breena’s absence from the infirmary was another concern. She arranged to put its day to day operation into the hands of her senior attendant, a corpulent woman of about sixty; and Gwendolyn had negotiated for two medical students, who were regular patrons of the wash house, to take turns at Breena’s between their lessons at the university (with the proviso that they receive a year’s free laundry).

Thilda and Seymour were sent to acquire the horses and mules. These were inspected by Thilda, and were secured at a very reasonable price. It seems that the looming presence of Seymour had aided in negotiating “discounts” from the liverymen.

Seymour seemed to have a fair amount of coin of his own, and Thilda convinced him to part with a little of it to have his armour repaired before their departure.  “It will be so much more comfortable without all those nasty dents,” she assured him, giving her most tender smile. “I know a place where it will be back to you in no time,” she added.  No one seemed to notice that this gave her an additional chance to see the tall pale figure who worked there. Better still Seymour not only provided the excuse to visit, but was paying for it as well.

The laundry itself would be left in the capable hands of Thyme and Mildred. They too lent a hand in the preparations, helping to check deliveries and packing things in more useful-sized packages.

At last departure eve arrived. Seymour led the animals to the Alleys, and careful packing of the saddle bags and mules was completed by dinner time. Seymour then returned to the livery-yard where he would keep watch. The sisters all would stay at the laundry for the night, and join Seymour near the farriers’.

It was not the most auspicious of send offs, as it was a grey drizzly morning. The companions had planned on bundling themselves a bit anyway in order to hide that they were armed. So in one sense it made them even less conspicuous as others were wrapped in cloaks and blankets as well.

They arrived at the livery gate and found that the horses were already saddled and waiting. “Hello, little sisters,” Seymour greeted with his usual affectionate sincerity.

“It looks like a lovely day to travel,” Seymour said, without the slightest sense of irony.

The sisters nodded, looking at the dismal sky, and Wil rolled her eyes, the meaning of which was lost on Seymour.

They mounted and began to make their way to Southgate, where they gave smiles, and a polite nod to the two “Rosemen” stationed there, as they exited.

Green meadows and freshly harvested fields lined their path as they began their journey southeastwards. 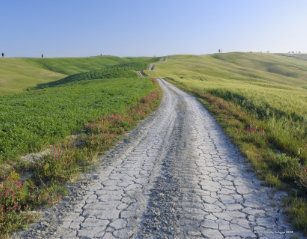 One thought on “Preparations and Departure: A Sisters Tale”