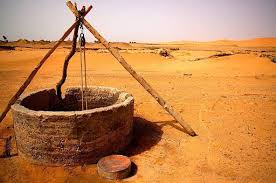 The storm finally broke, and it took some effort to move the piled sand from the doorway, but fortunately the door opened inwards. The landscape had been transformed by the days of blowing sand, but the forlorn towers still provided useful landmarks for them to get their bearings and to find the well.

It was a clear, hot day and the companions needed to squint against the brightness. The sand was nearly flat, without any disruptions say for the ripples left by the wind. Under these conditions it took them two hours to make the shadow of the first tower. This structure was shorter than the one they had recently occupied, it lacking the fifth signal level. In its place were more pronounced battlements, and the fourth story was laced with archers’ loops.

It was decided that they would forego a search of the tower, and after a brief rest set off after the much needed water.

They made the second tower just before noon. It like the first they had encountered was a signal tower. The third tower was clear in the distance, and they hoped to make the well and set camp by late afternoon.

The sand continued to take a uniform appearance until they were about a half mile from the next tower. Then three sets of eight indentations in parallel linear patterns became evident. Each set was divided in pairs of four, and occasionally a long grove would appear in the centre of the pairs before disappearing again. What made the discovery more disturbing is that each hole was about the size of a goose egg.

“Anyone have any ideas,” Gwendolyn asked, as she checked the horizon in each direction.

“They are definitely tracks,” Thilda concluded, “and they seem to be going the same direction as we are.”

They continued on their course and tried to stay out of the direct path of the imprints. Then as they started to climb a small dune, they could hear a clicking noise ahead.  They dismounted, and Seymour crested the dune, and called back to them, “It’s only scorpions.”

Yes, they were only scorpions, and each one was the size of a Great Dane. The creatures raised their tails to strike, and Seymour readied his axes. Just then Thilda and Maya topped the mound.

Maya’s jaw dropped, then she exclaimed, “I detest scorpions.” She then let a fireball loose at one of the beasts. It was knocked backwards, but not killed. Thilda shot an arrow into the head of a second creature, as Maya prepared another shot.

Breena and Gwendolyn had by this time had joined, leaving Wil with the animals. Breena muttered an incantation, then said “Freeze.” A blast of blue-white crystals formed on the shell of the third creature and its legs buckled. It fell on its side motionless.

Gwendolyn and Thilda both shot at the second scorpion at the same time. Thilda’s shaft penetrating its flank, and Gwendolyn’s its belly. It too staggered, but then lunged forward to sting, but Seymour’s axe sliced the barb of the creature’s tail. It then collapsed, but not before showering Seymour with fluid from its injured tail.

The previous singed animal, had recovered and was raising its pincers in a threatening gesture when a second fireball rocked it. It began to sputter boiling liquid from its mouth, and then fell head first into the sand.

“This kind of burns,” Seymour said holding up one arm which was beginning to blister.

“Bring whatever water we have,” Breena said as she started to douse the burns with her own water bottle.

They flushed the wound as best they could, and Breena put a salve on it. “We need to get him to water soon.”

They quickly recovered their arrows, and made for the third tower with more haste than was prudent in the hot conditions. Once in the shadow of the tower, they located the well only about twenty yards away.  They were lucky, the map had been accurate, and the water was sweet. They drew several buckets full and irrigated Seymour’s arm. Then Breena applied more salve, and bandaged it carefully.

The animals were then watered, and drinking containers filled. Rather than forcing the door of the tower, the companions pitched their tents in its lee. Seymour would sleep that night, and Gwendolyn would take his watch.

This Sisters Tale follows: The Tower

Word of the Day Challenge: Forlorn