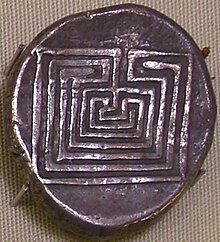 On the other side of the tapestry was another room. It had one large door directly in front of them and nothing else was in the space except a marble altar at its centre. The marble had been inlaid with bronze plaque which bore the inscription:

The way is open for all to find –

Pray, you may chose but one guide –

When left is right and right is left,

Your face will reveal the true side.

On the altar top were four disks, each identical in size. The first was of polished gold bearing a diagram on the one side depicting a labyrinth. On its reverse was merely a small inscription “The Way.  The second was of terracotta with a slightly different maze, and a small brass plate set into its reverse with the word “Path.” The third was made of crystal and platinum wires were encased in the glass making yet a third pattern. Its reverse could be seen trough the disk, and the word “Way” was only legible by looking through the front of the pane. The final disk was made of jade, and the lines of the maze were set into it in silver. The word “Path” was in large silver letters across its entire back.

“Only one?” questioned Thilda as she picked up the crystal. She then tried to pick up the gold one as well, but it would not budge. Successive attempts proved that only one disk could be taken from the altar. If one was returned another could be accessed, but no two could be removed at one time.

“That is unnatural,” Star observed.

“Which one should we take then?” Gwendolyn queried.

“True face,” Thilda said. “If we look through the crystal and follow the lines maybe that is the true face. It will be looking forward, not back.”

“Yes,” responded Breena, “but not ‘all’ can afford crystal. The clay one is available to ‘all.'”

“Wait, three of them have kinds of mirrors on them. Left is right, that happens in a mirror,” Star said.

“Okay, so we rule out the costly pieces, and go with the pottery one,” Gwendolyn concluded.

They all agreed, and Breena took the clay disk from the table to aid them in their quest.

Maya used the trap rat to inspect the doorway, and it was found to be safe. The carefully opened it and lit two lamps against its darkness. A staircase led downwards into the gloom and they filed down with Star and Thilda in the lead.  When they reached the bottom, a corridor led to the left and right.

When they came to the first “T” junction, the disk indicated that they continue straight ahead. Gwendolyn shined her lamp down the passage to the right and could make out crushed skeletal remains only about ten yards from the intersection. It was also clear that there were several chipped paving stones around the bones. Her eyes were drawn upwards where it was clear that holes corresponding to the chips were in the ceiling. Gwendolyn immediately examined the ceiling of their passage which revealed no such openings.

“Stay in the middle of our own path,” she said to the others. “Don’t even step into the wrong passages.”

When they came to the next verge, it took the form of a “Y” to which the “guide” indicated a left. “Go right,” Breena warned.

At the next intersection a previous traveller had marked the side route with an “X,” and their present path with an arrow.

“But, the disk says the “X” is the right way,” Breena said. “I think we should trust the disk, not any mis-directions.”  At this, Thilda tossed an empty bowstring spool into the passage before them and a spring loaded trapdoor in the floor gave way under it.

“Keep with the disk, it is,” Thilda said. The others immediately agreed.

After about a dozen additional turnings a green glow became apparent ahead of them. They finally entered into a large antechamber which was bathed in the green light. Murals depicting the beautiful woman, and the adoring men adorned the walls, and baskets of what seemed to be offerings were arranged under the images.

Among the tributes were coin purses, jars of costly oils and perfumes, and various other small treasures. A bronze plaque in the centre of the floor read:

The way is complete

You have passed the test

All who shall Her worship

“Should we rest or go on?” Thilda asked.

“Both,” Gwendolyn answered, as Maya prepared the trap rat to check the door ahead of them.

Today’s Word of the Day is Plan