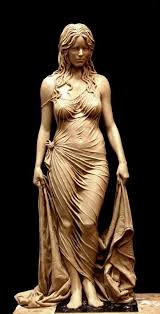 At the end of the labyrinth stood a large ivory door, inlaid with gold. Two braziers flickered before it, with eerie green flame.

The door was not locked, and swung open with only the gentlest of pressure. There sitting on a throne constructed of the same materials as the door, was a tall beautiful woman. The statues and images they had encountered within the temple proved not to be exaggerations, but rather pale reflections of this woman’s glory.

Three attendants served her, each in her own right would be seen as a great beauty, if they had not been in the presence of the seated woman.

“Greetings, my daughters,” the woman said, with words that flowed with honey.

The “sisters” stood for a moment in awe. Then regained their composure.

“You have travelled far, and yet, I perceive you have not come to worship,” the woman observed. “Such a foolish act, to come to my house with ill-intention.”

“We are honourable,” Breena interjected. “It is you who are false.”

“How dare you!” the woman screamed. Her attendants each drew a dagger from their robes and shielded the still seated figure.

“You are no goddess,” Breena continued. She then muttered a few mystic words, and concluded with a raised voice, “Truth!”

Immediately the seated figure was revealed to be a Succubus, with harsh facial features, leathery wings, and a forked tongue. Her attendants were likewise transformed, each aging to reveal their true nature, with haggard features, grey hair, and stooped postures.

The lead figure, a woman of about eighty, howled and sprung forward with her dagger. Maya parried the blow with her kris and pushed the woman to the floor. Another hurled her blade at Breena, giving her a graze on her left shoulder. Thilda countered with an arrow to the woman’s midsection. The first woman struggled to regain her feet, and was struck down by a blow from Star. The remaining attendant attempted to shield her mistress, only to be hit by a crossbow bolt from Gwendolyn.

The Succubus rose from her seat, bringing herself to her full eight feet in height. She called out in a sultry voice, “Lovers, attend me.”

Throughout the complex the bodies of slain males rose.

It was shortly before noon on the second day after the other “sisters'” departure.  Seymour had just returned with a supply of fire wood, when Wil noticed movement in the sands around them.

The bodies of the fallen were animating, skeletons and less decayed bodies were taking to their feet. Some of these crawled around as they were missing legs, or wandered aimlessly for want of a head. Others, however, began to retrieve weapons.

A small group of these approached Wil and Seymour’s camp. Wil embedded a dart into the throat of a staggering corpse with no sign of any effect. She then grabbed one of the Ralulee lances from the mule, and prepared to meet the ghoul. Seymour, however,  lashed out and split the animated form from crown to groin, and it fell in two pieces quivering on the ground.

Wil was quick on how to proceed. “Cut off their legs,” she called out to Seymour.

He caught the next skeletal figure across the thighbones, and it collapsed still trying to move forwards. Wil in turn used her spear to trip up another skeleton.  It recovered more quickly than she would have hoped, so she was forced to parry its sword blow with a large piece of firewood. She then swung the log, launching the skeleton’s skull from its neck. It began to flail about swinging its sword randomly. Seymour took its legs out from under it as well.

A recently deceased Ralulee rose before Wil, she threw a flask of oil upon the corpse, and set it alight with a piece of flaming firewood.

Over a dozen figures in various stages of decay began to converse on the pair, and yet others seemed to be proceeding towards the temple. Suddenly, all of the bodies collapsed where they stood.

“What the hells was that,” Wil exclaimed.

“Looks like we did well,” Seymour observed, looking at the nearly twenty prone figures before them. “They fought well for skinny guys.”

“Whatever!” Wilberta responded, rolling her eyes.

As the Succubus rose, Breena noticed a vibration and an audible hum from her side pouch. She reached in and found that the winged crystal figure had begun to dimly glow in the same shade of green as the braziers beyond the door.

She could now notice that the figure resembled the demon before her. There was also the disturbing sound of movement in the tunnels of the maze behind them.  The party was soon to be trapped between the Succubus and who or whatever was making its way towards them.

As the shuffling sounds came nearer, the crystal began to glow brighter. As the illumination increased the Succubus covered her eyes and let out a screech. Just then the bodies of the four Ralulee from the gallery hallway entered the antechamber.

“Come my lovers!” the demon beckoned. But the glow of the figurine seemed to hold them at bay.

Two skeletal figures joined the Ralulee, and they too halted in their tracks. The glow now was nearly blinding to the “sisters” as well, and it had begun to grow hot. Even on the end of its cord, it was becoming too warm for Breena to hang onto. She shrieked as it began to burn her fingers, and she involuntarily let loose of it. As the scorching crystal hit the floor it exploded, and all of the male remains collapsed into heaps.

The Succubus as well seemed drained of power, and even appeared to have diminished in stature.   Thilda used the opportunity to let loose an arrow which struck the fiend in the chest. Gwendolyn followed suit, as black blood shot from its wound. Star then bounded forward burying her scimitar in her neck. The Succubus let out a final scream and crumpled backwards onto her throne.

Today’s Word of the Day is Power