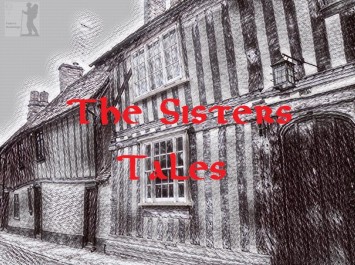 “Seymour, come with me,” Gwendolyn said.

The tall warrior dutifully followed his “little sister” up the stairs to the balcony terrace.  As they crested the stairs they could see Dennis and Helen eating pheasant and enjoying wine on a scrumptiously prepared table.  It was surprising the assortment of dainties that this little tavern had managed to put on for “The Baron.”

Gwendolyn stood atop the stairs and clearing her throat said, “Hello Dennis, Helen.”

Dennis and Helen sat silently, and Helen was doing her utmost to hold back sobs.

“Baron, is it?” Gwendolyn queried.  “Must have got a nice little start with those urns, not to mention my life-savings.”

“Yes, I know, it’s a con.  Couldn’t have come up with something better than Hasenpfeffer?” she jeered.

As she spoke Dennis slowly lowered his right arm under the table.

“It has worked well enough so far,” he said a little more confidently.

Just then he quickly drew a small crossbow from under the tablecloth.  His efforts were not quite fast enough, however, for before he could level it one of Seymour’s axes sang as it sliced through the air taking the crown of the villain’s head off.  He fell face first into a bowl of spiced fruits.

Helen cried out in terror, and made a jump for the bow that had fallen to the table.  Before she could lift it, however, and scarlet fletched arrow passed through the railings from below and caught her in the throat.  She fell to the floor choking and then expired.

A minute later Thilda stepped into the terrace and collected her arrow.  “Sorry about your cloak, Gwen, but that will never come out,” she said dryly.

As they turned they were met by the landlord, and the two constables.  “Who’s going to pay for all this?” the man demanded. “And he owed me money as well.”

“Looks like a case of self-defense to me,” said the first watchman.

“What?” interrupted the publican.

“Self-defense.  Foreign fellow went for the crossbow.  Nothing to answer from the law.”

“But the mess, and the bill?” The landlord started again.

“I think the tiara should cover your bill,” Thilda said, “If it’s not fake that is.”

“There’s a coach in your yard as well,” Gwendolyn suggested.  “After all he checked out without paying.  Seems a fair payment.”

The proprietor looked quizzically at the Rosies for a sign that this might be a legal course of action.

Thilda suddenly burst into laughter, and looking over her shoulder at Dennis’ still form said, “Looks like he got his just desserts.”

Gwendolyn just shook her head, then asked the watchmen if they were free to go.

“Of course,” the first one said, “but might need you to initial a report in the morning if you don’t mind, Ma’am.”

“We are staying here tonight, and want to get on the road early,” Gwendolyn said.

“Have a good evening,” the second Roseman said, “We will bring you the papers at breakfast.”

“The two cops then went back down to finish their “tea.”

The trio re-joined their companions in the lounge below, and as they were just starting to unwind from the episode, Seymour let out a tremendous roar of a laugh, “Desserts!”