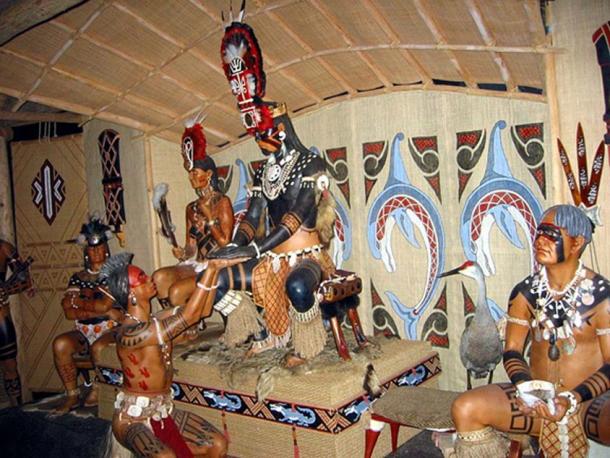 A diorama of a Calusa chief in the Florida Museum of Natural History. ( Public Domain )

“If I remember correctly, it was in the spring of 1521 that I joined Governor Ponce de León and about two-hundred others to establish a colony in The Land of Flowers.  We were well prepared.  We had livestock, building materials, and even priests with us.  We landed in an estuary, and all seemed to be going well.  Most of us were more interested in finding gold than in setting up farms, but the glory of Spain was going to be bolstered either way,” Juan Sanchez told the interviewer.

“What happened next?” the inquisitive listener asked.

“We had left the ships and started to clear land for a fort, but we were attacked by the Calusa.  It was a terrible fight.  I remember Ponce de León being struck with an arrow in the leg, but then I was clubbed over the helmet and blacked out,” the former soldier reported.

“Well, when I came to, I was tied up and I could see that the ships had left.  The Indians were rummaging through the supplies we had brought.  I was taken back to their city and was sure that I was going to be killed or sacrificed to their ‘spirits.’  Instead they made me a slave.  Over time I learned their language and their ways.  After several years, the Calusa made a pact with Spain and I was offered my freedom.  Though free, I had grown accustomed to their ways and went with a party of the Calusa into the wilderness as they, and I [having taken a Calusa wife], wanted nothing to do with Spain.”

“Where did you go?” the interviewer questioned.

“We travelled inland and to the south until we came to the swamps and everglades.  We made a new home for ourselves there.  Life was happy, and we had plenty of fish, and there was a wonderful freshwater spring in one of the clearings,” Sanchez explained.

“So why have you come out of the swamps now?”

“Well, my wife died a few weeks ago and there was no longer anything to keep me there.  And after all I will be 520 next Thursday,” the old soldier said matter of factly.

“That’s amazing,” the interviewer remarked.  “You don’t look a day over fifty,” she said.  Turing to the camera she then said, “And there you have it, an interview with 519-year-old Juan Sanchez.  I am Milly Taylor, WFL Tampa TV News.”

Elemental Writing Challenge April 14  The prompt was Water: rejevunating, so my story is based on the “the Fountain of Youth.”

One thought on “The Report”