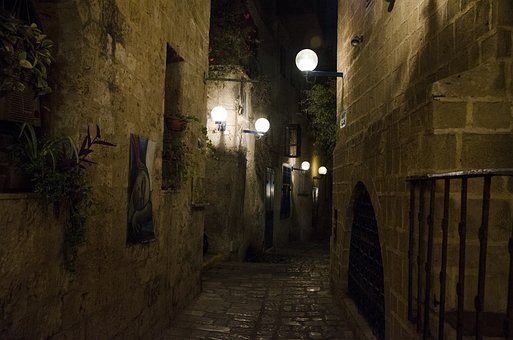 There was a disturbance somewhere on Grope Lane.  The proprietors of several of the licensed premises had complained of an eerie wailing which was putting off their customers.  Roseman Bryan Fuller went to Easy Virtue House to investigate the complaint.

“It’s coming from down Welcome Alley,” the buxom Madame Fantasia said. “You should see to it right away.  It is a dreadful racket.”

The constable made his way to the alley, and as he neared it, there was indeed a terrible hollow wail that seemed to echo in a deep unworldly tone.  It sent shivers up his spine despite of all that he had seen in his many years in the Watch.  Whatever it was, it was not anything he had come across before.

He drew his truncheon and tightened his belt before rounding the corner.

Though Welcome Alley was usually fairly busy at this time of the evening with several free-lance or semi-retired “ladies” plying their trade there, Fuller found it abandoned.  The usual mix detritus common to the backstreets of the Alleys District filled his nostrils with unpleasant sensations, but he continued into the dark passage anyway.

The wailing became louder, and echoed the more as he approached a disused well at the centre of the litter strewn passage.  From it came the sound, sending new waves of chill up his back.  When he reached it, he noticed that a new length of rope had been put onto the beam.  He returned his truncheon to his belt, and then began to crank the mechanism upwards.

As the rope shortened the eerie wail, echoed less and became easily identifiable as the crying of a new born infant.  As the bucket came into view, Fuller could see the naked form of a baby girl in it, the cord and afterbirth still attached.   The child’s mother had presumably tried to drown the babe, but the bucket had floated or come to rest on the amassed rubbish at the well-bottom.

Fuller retrieved the child and carefully wrapper her in his cloak.  He then headed straight to Breena Bright’s new hospital.

He was surprised when found one of the attendants standing at the door, as if waiting for his arrival.  At this hour even this haven of hope in the dark district should have been barred from within.

“Come in Constable,” the attendant said.  “The Prophetess said to expect you.”

As he stepped in another nurse approached him with a clean white blanket, and took the baby from his strong embrace.

Constable Fuller followed her into an office in which “the Prophetess” was sat whispering to some unseen auditor.

“Ah, Senior Constable,” she said looking up.  “I trust that you were not too traumatised by your discovery.”

“Well – I um,” he began. “No matter, it’s all seemed to have worked out now,” he said.  “But tell me, what will happen to the little thing?” he asked with a clear concern.

“She will be checked over, and then sent to one of our orphanages,” Breena said. “Why do you ask?”

“Well, I kind of, you know – feel responsible,” he said looking down at his boots.

Breena fell into a kind of trance, and then said as if to someone else, “Fascinating, I shall.”

“What?” the Roseman asked with obvious confusion.

“Constable, what is your name?” Breena asked.

“No, your given name,” the healer corrected.

“Well Bryan, there has been a change of plans.  Little Bryana will be staying here with me.  You may visit her whenever you would like.”

Fuller didn’t know exactly why, but the announcement sent a warm feeling through his entire being.

“Now Senior Constable Bryan Fuller, if you don’t need anything else from us tonight, I am sure you have duties to attend to.”