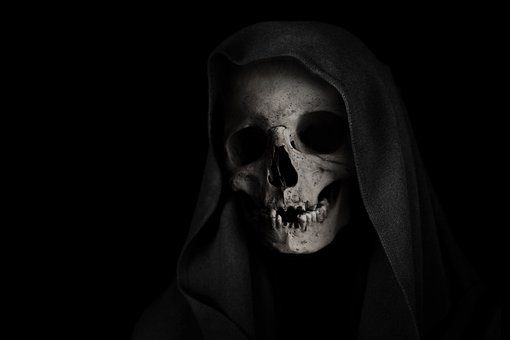 Arrias the Merchant was a man of wealth and power.  While a steady stream of supplicants for his favour visited his office daily, they did so under the steely gaze of Arrias’ dozen bodyguards.  Arrias was envied, even feared, but he was also despised by those who owed him money or favours.

He slept each night in a chamber with iron bars on the windows, and heavy wooden shutters lest an assassin attempt to shoot a dart or bow through the openings.  His door was of bronze clad oak.

Yet he slept fitfully.   Each day he gazed at the drooping chin, and greying temples with the knowledge that another assassin which he could not thwart, would soon stock him.

Then the day came.  He was sitting in his counting room and he saw the briefest glimpse of what seemed a skeletal black robed figure pass behind him and reflect upon his silver goblet.  Arrias shoved the cup from himself, and ran to his rooms, locking and barring the door from within.  There was a scraping sound upon the outer bronze work, and he looked through the reinforced peephole to see the grinning face of death.

Arrias’ heart pounded, and then slowed.  With elation he looked again, the figure had been outrun.  He had cheated the reaper!

Satisfied he sat in his upholstered chair, and congratulated himself.

He then noticed he was not alone in the room.  Sitting at the foot of his bed was a small blonde girl of about six.  She was swinging her legs silently, and mouthing a silent singsong of a rhyme.
Startled, Arrias asked, “Child what are you doing here?  Is your mother one of my maids?”

“I am the visitor that you have so long sought to avoid,” she said with a sad smile.

Arrias did not panic, but slowly closed his eyes and passed.

2 thoughts on “The Visitor”