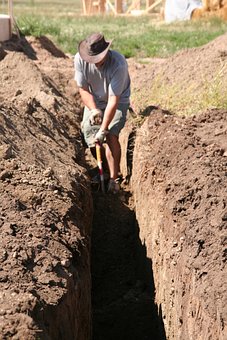 Ivan put down his shovel and wiped his face before taking a large gulp of water.  He looked around him and congratulated himself on the progress he was making.  Breaking apart the platform of the old rail station had been back breaking work, but the digging of these new foundations was even harder, especially when his trench broke through that old sewage line.  By the time he had finished that section he was anosmic.

Oh well, he mused, back to work.

An hour and half later he started to dig the perpendicular trench and was just about to get to the point where the trenches converged when he saw a young man approaching him with a shovel over his shoulder.

“I am Peter, and the foremen sent me to help.”

“But I don’t need any help,” Ivan said. “Did he say if there was anything specific that you were supposed to help with?”

The young man took out a hand-drawn diagram and pointed to a section with large rectangle which was drawn with red and white stripes.

“I am supposed to help dig these twenty metres,” he said.

“Metres?” Ivan questioned, pulling out his own diagram.  “Metres, damn!”

Ivans’ morning of success had been barmecidal.   He had spent the entire day  measuring in feet not metres.  It was enough to make him scream.

2 thoughts on “The Foundations”