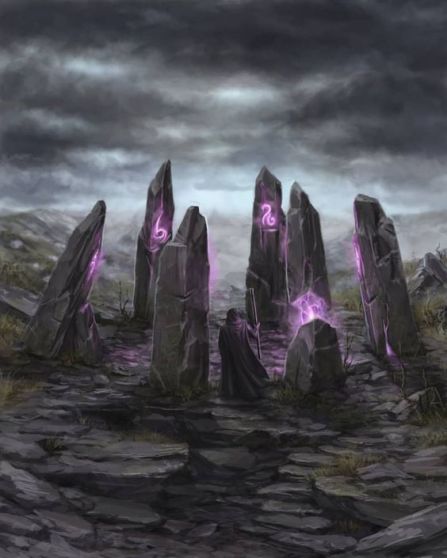 He was finally there–the place described in the ancient book he’d found. There was no mistaking it for any other. Circular pillars of stone reaching skyward in the heart of a desolate valley, he mouthed silently, repeating the words he’d burned into memory. But while the pillars might appear cold and lifeless at first glance, he knew better. They had only been sleeping, waiting through the ages for this very moment when they would finally be restored. His limbs trembled as he raised the staff that he had carried and protected for so long, rarely letting it leave his hands, let alone his sight. Carved into its surface were markings he barely understood. One by one, the same markings appeared on the pillars–not as carved images, but as light. A vibrant, violet light that popped, sizzled, and flickered like a roaring fire. Everything was about to change; a new era ready to begin….

That new beginning was slow at first.  Barely perceptible to the human senses changes to the fabric of the land began.  The staff bearer’s gaze, however, was upon the violet light and so he missed the sprouting of the first green shoots among the craggy rocks that surrounded the stone circle.

Suddenly the fire of the light shifted to green, and almost immediately grass began to grow beneath the staff-bearer’s feet.  All around him the grey slate of the once desolate valley was coming alive with greenery.  As he watched in wonder, the symbols again morphed and became blue.  At once, the sky brightened and an azure glory filled the heavens.   Nearby, a spring began to trickle from between two stones, and an ancient channel quickly filled with cool refreshing waters.

A final change came over the runes and as they began to radiate white light, butterflies and honeybees began to appear among the newly blossomed daisies.

The ground then shook and and the pillars sank into thick grassy earth, and the amazing transformation spread throughout the Lands.  The Age of Dark Magic had ended, the Age of the Prophecy of Light had begun.  The staff -bearer, Baldrick Little, had believed when none other did.  His faith in the ancient tome, and his diligence in finding the staff would lead to him becoming known throughout the Five Lands as Baldrick the Awakener.

4 thoughts on “The Awakener”