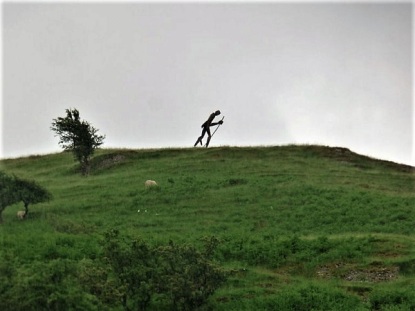 Some say he was a forest spirit, others that he was some the offspring of an Elf-maid and a Satyr.  Whatever the truth of the matter, one thing was true, no tree could be felled or deer hunted in his realm.

The woods that he called his home were deep and virgin.  The animals thrived and woodlands flourished.  Even the fields and meadows surrounding his forest were blessed by his presence.

For over eleven hundred years, tells of strange interventions in behalf of the woods had been related by foresters and woodsmen, but few were the actual sightings of the dark, lank figure.

Then suddenly in 2019 of the Common Era, a tall shadowy figure emerged from the wood.  With a staff in hand he strode through field and dale, his destination – London.  The ice caps were melting, plastics filled the seas, and politicians of a certain ilk continued to deny it was happening.

Soon they, like the ill-fated woodward, Gilbert Forrester who felled a tree in the Shadow’s forest back in 1120,  would know the wrath of the Shadow Man.

6 thoughts on “The Shadow Man’s Journey”