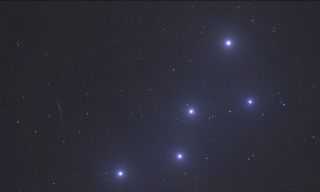 “There’s a big “W” in the sky,” Tilly said looking up in wonder.

“Cassiopeia?  That’s a funny name,” Tilly said mulling it over in her mind.  “Do you spell Cassiopeia with a W?”

“Not exactly,” her aunt explained.  “You see a long time ago there was a beautiful queen named Cassiopeia.  She was really, truly beautiful, but she was also brash and conceited.  She was so caught up into her own looks, that she looked down on the beauty of others.  She even went so far as to brag that she was more attractive than the goddesses or the sea nymphs called the Nereids.  This angered the Sea-god Poseidon who was married to one of the Nereids, so he sent a sea monster to punish her for vanity.   In the end she was cast into the sky as a punishment.”

“Yes, but Queen Cassi got the last laugh,” her aunt observed.  “See she’s still with us,  her name in the sky.”

Her Name in the Sky

One thought on “Written in the Sky”