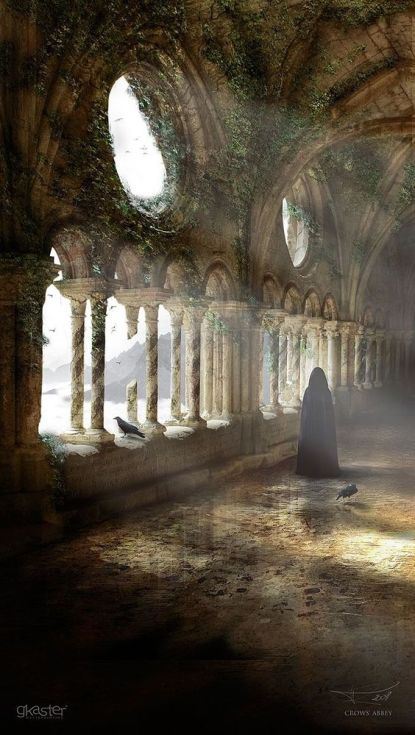 Beautiful, yet forlorn, this place is slowly succumbing to the ravages of time. The lonely figure walking this crumbling corridor is determined to remain its companion to the very end. It was a glorious place once, built by a wealth and power that has long ebbed away. But when this structure was new, and whole, it gave the lives of those within it meaning and purpose. This robed figure has not forgotten, even though its noble arches are now draped in vine, and the crows brazenly come and go as they please. There is writing etched deep into the stones beneath the pillars. Each word is a plea from the past; a silent but unyielding voice that demands a place in the present. The robed figure knows what they say. Do you?

Althan looked out from the gallery windows.  The vaulting of the ceiling was still secure, but the glazing of the windows had long succumb to the ravages of time.  But the inscriptions hinted as much.

“Only stone shall stand the wind of black wings’ blow. Hear me, for when the rooks enter the rook, the time of stone will have come.”

Yes, the builders thought they had mastered the stones.  Proud masons, and their even grander masters had dared quarry from the sacred mount.  “Our works and our fame will last forever,” they had claimed.

But now the pillars were askew.  Glass broken.  The haughty lords and ladies were long dead.  The self-congratulatory workers of stone – nowhere to be seen.

But how?  How did the magnificent place come to this?  Althan knew.  Althan’s mother’s, mother’s mother had been the first to see the words upon the wall at the base of the pillar.  They had just appeared one night.  She had been considered “just” serving maid, but she understood – as have her descendants.

She had been the daughter of a rook priestess.   She saw that it was folly to build a “house of frivolity” from holy rock.   The “betters” didn’t understand this.  They thought their own pleasure was all that had meaning.  But Althan’s kin knew better.  They knew that the rooks of the holy mount were the but shadows of the spirits of the stone.  When their nests were pulled down so the quarrying could begin, the spirits began waiting for their day.

Althan stood in the gallery and waited.  Today was the appointed day.  The rooks were coming.  The spirits were once again going inhabit the holy stones.  And she would be there to serve them.

One thought on “Rook’s Rooks”