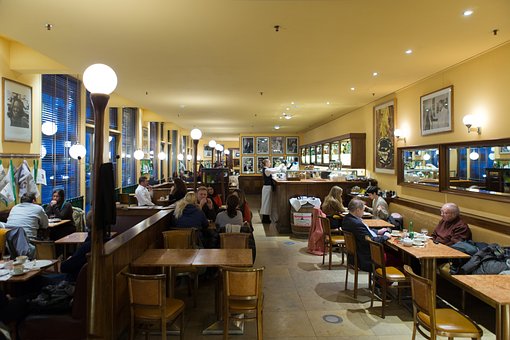 Brian sat quietly, alone at a booth in a wayside diner.  It was a Tuesday, and that meant it was Ruby May’s famous chicken fried steak today.  Brian didn’t know what it was about it that made him look forward to it so much.  Maybe it was the balance of black pepper and the hint of cajun spice, or maybe it was just that he like the chance to get out and the see Ruby’s welcoming smile.

“Yes ma’am,” he would reply and then begin to sip on his coffee, while he waited for his steak, and those creamy mashed potatoes.

Today was a little different than normal.  As he was sipping his coffee, a couple of young men and two young women took their seats in the booth across from him.

“Sooo – Freddy, this is your cousin you told us about,” a busty blonde of about twenty-five said.”

“Yea, this is Keith,” Freddy said.

Keith was in his mid-twenties.  He was wearing jeans and a T-shirt with the word “Army” across the chest.  Normally, Brian wouldn’t have taken much notice, but there was something about the young man who was carrying on the upwards side of thirty extra pound, and the Bronze Star ribbon pinned to his T-shirt that drew Brian’s attention.

Alice, Ruby’s assistant came and took the drinks orders for the foursome, and as soon as she left,  Keith started to regale the enthralled women with tales of his exploits on “secret missions,” and daring raids.

The scenarios discussed were all too familiar to Brian, and led him to momentarily drift into his own memories.  He was brought back to the present when Keith pulled out an iPhone with an Air Force cover and placed it on the table.

“Yep, only been back in country a few days,” he said.  “Hope you ladies won’t mind if I get a call and have to leave suddenly.”

Slowly, Brian used his arms to help swing his prosthetic legs from under the table.  He then took his crutch under one arm, and his coffee in the other hand, and moved towards a distant table.

As he went, Lance Corporal Brian Johnson said, “I knew a hero once, but he died pulling me from the humvee,”  No other words needed to be said.