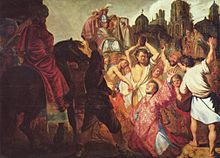 A few weeks ago I spoke on the topic of faith.  In that message I noted the centrality of faith in the Christian life.  The Apostle Paule wrote,

“And now these three remain: faith, hope and love. But the greatest of these is love (I Corinthians 13:13).”  Faith can be defined as a belief in which one has total confidence.  But scripture calls us to an even higher level of expectation.  “Now faith is the substance of things hoped for, the evidence of things not seen (Hebrews 11:1).”

I have on several occasions had students who remarked that the Hebrews passage is “stupid.”  I usually respond with asking why they see it that way.  I usually receive a reply along the lines that, “if you haven’t seen it yourself, how do you know that it wasn’t just made up?”

To this I reply, “No one knowingly dies for a lie.”

Jesus said,  “I am the way and the truth and the life. No one comes to the Father except through me (John 14:6).”   He stated that He was the path to salvation.  He also knew that that path would require Him to die as a sacrifice.

If we look at Jesus’ temptations in the desert, we see in the third test, that Satan gave Him “an out.”  He said if Jesus would worship him, he would give the peoples of the world to Jesus.  Jesus’ death wouldn’t be necessary.  Jesus however refuses the temptation, He was prepared to die to fulfill His mission (something that if He had made it up He would not have done), and He also refused to buy into a huge lie that Satan was worthy of worship.

Remember, you don’t die for a lie!

Peter in Acts 2:22 and following capsulises the Gospel by saying that Jesus was crucified, died and was buried.  But then he adds that Jesus is risen, and that he (Peter) is a witness.  His testimony is firm.  But “what if he made it up?”

In Acts 4 Peter is arrested, and ordered by the authorities (the same that had killed Jesus) to not speak the Gospel again.  His response is to question,  “Who should we obey?”  Should he obey God, and tell the truth, or cave in to the treat of those in power?  His action is one of confident faith.  Something many would not do, especially for a lie.

In Chapter 5, Peter is arrested again and beaten for the message.   Would you be beaten for a lie?  Maybe/maybe not, but Peter holds firm.

In Acts 7 Stephen filled with the Holy Spirit speaks of the same Gospel.  He then to express its fulfillment when he said he could see Jesus at the Father’s side welcoming him, even as he is being stoned to death.  He died, and for the truth.  He not once hesitated in his testimony, even in the faith of death.  You don’t die for a lie!

Chapter 9 shows us Saul, an enemy of the Gospel converted by an encounter with the resurrected Lord.  He surrendered a promising position in the Jewish hierarchy, to speak boldly the experience of his encounter.  Would he give up reputation, and position for a lie?  But that is not all.

“Let no one take me for a fool. But if you do, then tolerate me just as you would a fool, so that I may do a little boasting. 17 In this self-confident boasting I am not talking as the Lord would, but as a fool. 18 Since many are boasting in the way the world does, I too will boast. 19 You gladly put up with fools since you are so wise! 20 In fact, you even put up with anyone who enslaves you or exploits you or takes advantage of you or puts on airs or slaps you in the face. 21 To my shame I admit that we were too weak for that!Whatever anyone else dares to boast about—I am speaking as a fool—I also dare to boast about. 22 Are they Hebrews? So am I. Are they Israelites? So am I. Are they Abraham’s descendants? So am I. 23 Are they servants of Christ? (I am out of my mind to talk like this.) I am more. I have worked much harder, been in prison more frequently, been flogged more severely, and been exposed to death again and again. 24 Five times I received from the Jews the forty lashes minus one. 25 Three times I was beaten with rods, once I was pelted with stones, three times I was shipwrecked, I spent a night and a day in the open sea, 26 I have been constantly on the move. I have been in danger from rivers, in danger from bandits, in danger from my fellow Jews, in danger from Gentiles; in danger in the city, in danger in the country, in danger at sea; and in danger from false believers. 27 I have labored and toiled and have often gone without sleep; I have known hunger and thirst and have often gone without food; I have been cold and naked. 28 Besides everything else, I face daily the pressure of my concern for all the churches.”

To top it all off tradition tells us Paul was beheaded in Rome. Just as James had been beheaded by Herod for the Gospel.  Tradition says Peter crucified upside down, and his brother Andrew sideways, while Bartholomew was skinned alive and Thomas impaled.  The other Apostle James was stoned John boiled in oil but survived.  Each died, or was prepared to die for the “substance of things hoped for, the evidence of things not seen.”  Not one recanted.

Decide for yourself, does the gospel sound like something Steven, Paul, and the Twelve “made up?”

With that knowledge before you.  In what do you put your faith today?  Is it something worthy to live and die for?