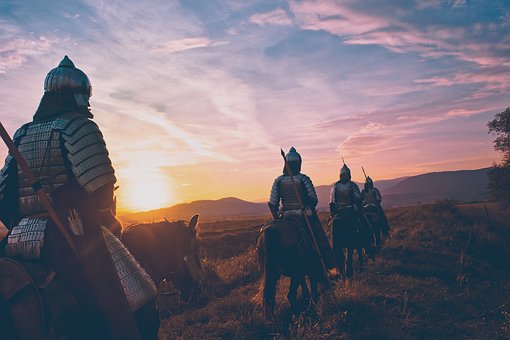 “Your Majesty, the spies and scouts have returned and there are large dust clouds approaching from the west and northwest.  It looks like Ral has mobilised the western armies to try to remove you in a coup.”
“Yes, yes,” the Pretender responded.  “Is there anything to report that I don’t already know?” he retorted snidely to his general.

“Percisely,” the prince replied, giving a nod towards the inner door, at which the veiled Seer picked up her things and retreated through it.

“The spies say the second column is being commanded by Ali Mamode’s son,” the officer said quickly.

“Mamode, you say?  I thought we had dealt with that conspirator,” Yaqub said coldly.

“That is the report, Highness.”

“Very well,” the Pretender said.  “Leave me, and send in Captain Fer.”

A short while later a lean hawk-faced man knocked at the chamber door.  Alem Fer was a career soldier, and led a small unit of “specialists.”  He was tall and sinewy, and had a chill look in his eyes.  Many who fell under his gaze could feel that same chill creep up their spines.

The “Ice Warrior” stepped into the room and removed his helmet.  He then stood motionless, without uttering a word.

“Fer, it seems my orders to arrest and “interrogate” young Mamode have been ignored.  He is now approaching us from the west.  I would like you and your specialists to rid me of this problem.”

The hawk-faced officer gave a quick bow of his head, put on his helmet and departed.

An hour later, Fer and five other men dressed in the Black Stallion livery of the old monarch spurred their horses southwest-wards.   After several hours of hard riding they looped back north to intercept the column approaching the Pretender’s stronghold.

The six riders reined in their mounts and an icy-eyed officer said, “We are from the Greenlands Border Garrison, and we have come to bring a message to the Ral.  Can you take me to him?”

The initial picket waved a red cloth above his head, and four horse archers approached slowly from behind a rise.  “If you will drop your weapons, you will be escorted to the camp,” the cloth-wielder said.  “Just precautions, you know.”

“Of course, quite understandable,” the icy-eyed leader replied.  The six riders dropped their scimitars and spears onto the ground, and the archers immediately relaxed the tension on their bowstrings.

“Yes Sir,” one of the archers replied.  “This way gentlemen.”  The riders and their escorts then trotted off to the north, passing through another dozen waiting archers.