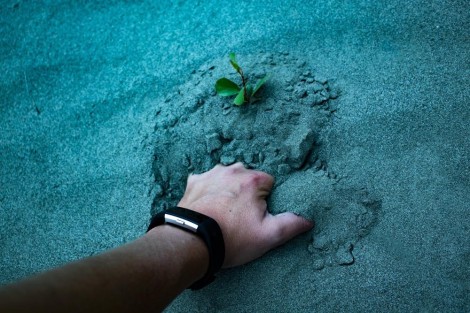 Doug was always skeptical of any claims of the supernatural.  But he thought it might be a laugh to take in Mystic Marge’s show in his Vegas hotel’s showroom.

The performance was pretty interesting, but in his mind there was a lot of cold readings, and guess work involved.  It did start to entertain him though, if for nothing else the audience members’ reactions when she mentioned a familiar name, or place.

“You in 16B,” she said in a otherworldly voice , her fingertips to her temples.  “You will find all you need, if you dig at the first sign of life.  The meaning will become clear to you.”

Doug, the occupant of seat 16B, gave her a wave, and then put it out of his mind as a grandstanding gesture, as it sounded impressive, but nobody else in the room would ever be able to follow up on it.

Then two days later, he flipped his car on a desert road north of the city.  His vehicle totaled, and his phone broken; he wandered in a daze into the sands.  Then as his senses cleared, he saw a small seedling.  Digging at its base, he found a cellphone.