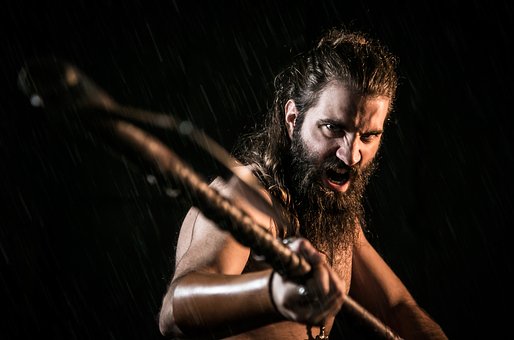 Ulias sat at the little guard table and rolled the dice.

“Yeah, yeah,” he responded to himself, “Guess I win again,” he sighed, and picked up the dice and placed them in the cup.

He stood up and walked over to the calendar on the wall.  Only the Fourteenth, he mused, and stepped to the large sand-timer and watched the last few grains fall.  He flipped the timepiece over and went to the logbook.  Twelve O’Clock and all is well, he scribbled.

Two more hours and he could go wake Eriad.  What would that be, the seventieth time?  Ulias shock his head.  It wasn’t like it really mattered.  After all they were less than three months into their six-month watch.

He went to the cupboard that served as their pantry, and took out a loaf of crusty bread.  It crumbled as he cut himself a thick slice.  He glued the scattered chunks together with a butter and took a bite.  Three days old, but not bad, he thought.  Fresh loaf tomorrow if Eriad baked like he is supposed to.

His bread finished he walked over to the weapons stand and hefted a decorated battle axe.  It was a magnificent weapon, perfectly balanced and forged in dragon’s fire, they said.  He ran his finger over the runes which glowed blue in turn as his finger passed over them.

Returning the artifact to its place, he turned to the game table and frowned at the cards before him.  His hand was laid out perfectly, a sure sign that Eriad had been cheating again, as Ulias distinctly remembered leaving the third card sticking out above the other.

Just then a little bell tinkled.  Ulias turned and looked at the row of bells on the wire by the guard desk.  It was definitely the signal from the main passage.  He watched the bells waiting for the counter signal to be rung.  Nothing.

He tightened his breastplate and drew out the magic axe from the stand.  Finally something to do, he thought.  He then banged on the door of the sleeping chamber with the haft of the axe, “Eriad, get up!  We have company.”