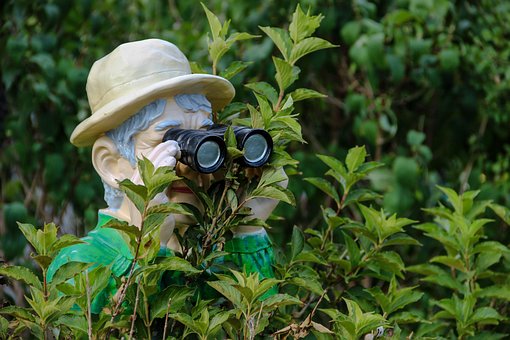 Tom Peipce hated the whole lock down deal.  March and April found him pottering about in the garden. While not much of a gardener there was some thing about the greenery that he found relaxing.  The only real company he had was his dog, Buster, and while a loyal companion, old Buster was far from a great conversationalist.

But what Tom really missed, even more than conversation, was seeing women.  At least back at the office there were pretty faces other than Buster’s to gaze at.  Yes, Tom was a bit of a leerer, a fact not missed by several of his colleagues.

But as May sunshine found its way to his quarantine prison, his concupiscent nature found a new outlet.  Yes, as the rays of sunshine became stronger, his neighbour Barbara began to sunbathe.  This was an elysian development for Tom, but he knew he would need to tread carefully, and keep on his toes.

That evening he removed a small plank from his garden shed which overlooked Barbara’s garden, and covered the spot with a piece of coconut matting that he could use as a kind of curtain.

Things went well for the next couple of days as the bikini-clad Barbara enjoyed the fine weather.  But she had an uneasy feeling that she was being watched.  As a result she kept glancing over towards Tom’s location.  It had become time for Tom’s Plan B.

Tom leaned over and whispered in Buster’s ear, and the dog immediately went over and began to paw the fence.  Barbara drawn by the sound leaned over the fence and ruffled the animal’s hair.  “Hey there, Buster.  You been watching me boy?  I bet you’re lonely.”

Her suspicions now allayed, Barbara returned to her lounge chair.  Feeling triumphant, Tom fished out an old pair of binoculars from under his chair, and adjusted them to compensate for the expanse of garden.

Tom Peipce of Coventry was a menace.  Fortunately he had his comeuppance when, as social bubbles were introduced,  Barbara’s older brother, Gino Godiva noticed movement in the shed.  The rest shall we say is history.

One thought on “Tom”