Those accent differences that standout

When said out loud

Don’t matter much when written

On the internet cloud

I write colour, and you without the “u”

The same of honour and honor

But when we say them,

They come out the same

So it’s not the accent that is at blame

English then is a very strange tongue

It doesn’t really matter if Yank or a Briton 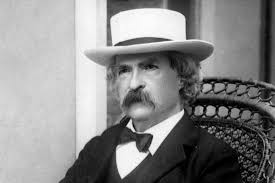 Mark Twain [Samuel Clemens 1835 – 1910] was man of experience, he had been a soldier (and deserter), journalist, and traveller.  He dabbled in technology, and he was an outstanding public speaker. His knack was for bringing his experiences and insights together and presenting them in an “unpolished” natural way.

Herein lies one of his first speaking “tips” practice to seem unpractised.  Kraid Ashbaugh has said that Twain’s diction and public presentation was cultivated to seem natural.  He worked at being familiar and turning catchy “home spun” phrases.

This was seen in his Missouri drawl as well.  He practiced and accentuated his image of the homely local wit.  He used his regional accent as an asset, rather than trying to cover it up to become “staged articulate.”

In his humorous speeches, he focused on getting the audience to laugh at itself.  He did this in a simple unthreatening way which endeared rather than alienated.  He famously gave a speech in German in Vienna entitled, “The Horrors of the German Language.”

So what can we get from Sam C?  First speak about the things you know.  Use your experiences and interests as the basis of what you share.

Secondly, be or at least seem natural.  Don’t be too formal (unless you are the formal type), but be yourself.  Audiences prefer the “real.”

Use your weaknesses as strengths.  If nervous, go with it.  If your voice is unusual, maximise it.  It can make you memorable.

Have fun with having fun.  It’s okay to point out the humour in things including in yourself, and your listeners.