And you went off to bed

It is why books are so great

Unlike TV you can take a break

Another in a vintage 1880’s cowboy vest

All titles arranged by the decade of first print

Some quite worn, while others are mint

What is it about this bookstore that defies time?

Is that why it’s named Vellichor on the sign?

I chanced upon a library at night

Where the words come out to play

Stifled by the silence of the place

Bound to their pages in the day

But when the doors are locked

And the readers have all gone home

They let loose in eloquence

Usually started by a poem

Oh what tales are related then

Puns and wordplay do abound

As the newspapers listen – remembering all

But dawn shall soon return

And the words then will silent fall

As soon as they hear the key in the door

And the footsteps in the hall 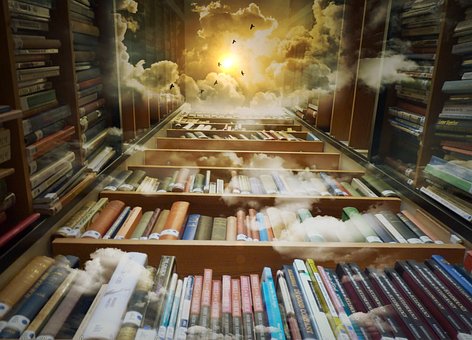 Suzie excused herself from the dinner table and quietly made her way to the loo.  As soon as she closed the bathroom door a strange sensation came over her.  She suddenly found herself in an unfamiliar landscape sitting on a boulder overlooking a broad valley, with a sparkling ribbon of a river meandering through it.

Large eagles soared above her and the towers of a cold grey castle could just be made out in the distance.

Suddenly the eagles made deliberate flight to the eastwards, and a huge shadow passed over her from the west.  She looked up to see the form of a sapphire hued dragon descending into a meadow to her left.

Though she hadn’t noticed the meadow at first, her attention being drawn to the valley, it now was clearly the point of her focus, along with the beautiful blue beast which now was settling next to a clear pond for a drink.  Shimmering dragonflies darted around the noble creatures brow as it drank, and . . .

There was suddenly a startling rap upon the door.

“Did you fall in?” Gary asked through the woodwork.

“No, I’m okay,” she replied, closing her book and hiding it back under the stacked towels again.

Prompt B (sentence starter): “Did you fall in?”