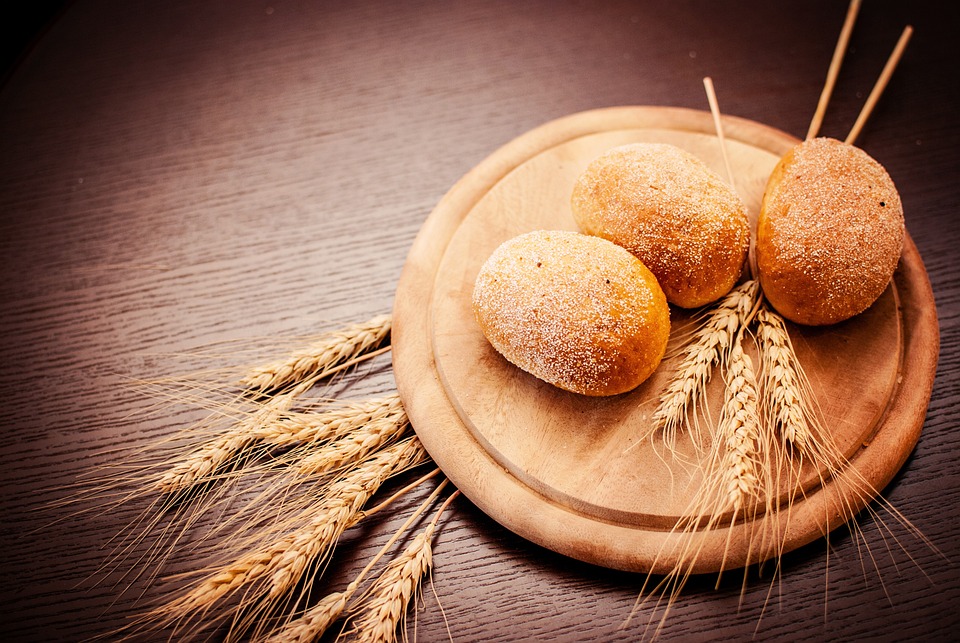 Image by xmmr89x from Pixabay

When in the wilderness

To a Promise Land bound

(Manna – Exodus 16:14 – “When the dew evaporated, a flaky substance as fine as frost blanketed the ground.” Exodus 16:31 -“The Israelites called the food manna. It was white like coriander seed, and it tasted like honey wafers.”)

In yet another lonely place

A multitude with no food was found

From but five loaves and two fish

5000 men were fed – and leftovers did abound

(Feeding of 5000 – John 6:1-14 – “When they were satisfied, he told his disciples, “Gather up the fragments left over, so that nothing may be lost.”  So they gathered them up, and from the fragments of the five barley loaves, left by those who had eaten, they filled twelve baskets (verses 12 and 13).”

“Give us this day our daily bread”

A prayer simple and yet profound

We do not provide by our own power

But in You – our fortunes are bound

“In this bread I will be found

As often as you eat of it

I – in your presence will be around “

(Last Supper – I Corinthians 11:  23 – 26 – “For I received from the Lord what I also delivered to you, that the Lord Jesus on the night when he was betrayed took bread, and when he had given thanks, he broke it, and said, ‘This is my body, which is for you. Do this in remembrance of me.’ In the same way also he took the cup, after supper, saying, ‘This cup is the new covenant in my blood. Do this, as often as you drink it, in remembrance of me.’  For as often as you eat this bread and drink the cup, you proclaim the Lord’s death until he comes.”)

I recently received a delivery of 25 kilos of potatoes, a very welcome addition to my pantry.  As I have run out of store bought bread, I decided to use the abundance of spuds to make some potato bread.  This is a simple recipe, and while time consuming, it takes nowhere near as long as making yeast risen breads.

Peel and dice the potatoes and boil in water with a pinch of salt.  When tender (15 minutes) drain and mash.  In a large mixing bowl add flour, salt, and pepper.  Stir in the mashed potato, and add eggs.   Mix and then knead, adding dustings of flour if needed.  Dust your work surface with flour, and place dough ball in the centre.  Flatten the ball into a large disk.  Dust with flour.  If it is still tacky, fold in half and dust again before flattening.  Continue until a firm but pliable dough disk.  Let rest five minutes.  In a large frying pan (large enough to accommodate the dough) or griddle, heat butter to medium high, but not enough to burn it.  Place the dough disk in the hot pan and allow to cook for about 2 minutes then flip.  Cook for 1 to 2 minutes then cut the disk into 6 to 8 slices.  Remove.

If the loaf is to large to fit the pan, then separate into slices before cooking, though this process takes longer and requires a bit more butter.

Serve warm or cold, with lashings of butter or melted cheese.  I did the cheese option by placing slices of cheese on the warm bread, and then microwaving for 30 seconds.

My wife has really wanted to have some “bread,” but she hasn’t wanted to mess up her gain on her ketogenic diet.  After some research, and the relative success of almond flour flat breads, almond bread seeded the answer.  Here is the recipe which after a little bit of trial proved a keeper.

Preheat an oven to 180 C/350 F. In a large mixing bowl add the almond flour, salt, Stevia,  and baking powder. Mix very well.  Separate the eggs (putting two yolks aside for other recipes) and mix the remaining too yolks until smooth. Add the sour cream and warm water to the yolks, and then mix them into the dry ingredients. Melt the butter and add this to the mixture as well and stir until a moist dough. Whip the egg whites until stiff, and them slowly stir this into the dough ball but do not over mix.

Line a loaf pan with baking paper and pour in the dough. Bake for 45 minutes (but check at 40).  The bread is ready when a skewer or tooth pick comes out dry.

Allow to cool at least 10 minutes before removing from pan to avoid crumbling.

We found this to be a moist, nutty loaf, and one that cuts well for toast; or to eat with soup or cheese.

Today, Christians around the world will remember Jesus’ “Last Supper.” Whether it be through a special Maundy Thursday service, or merely through their individual thoughts on the passion week, it is a time to reflect.

Paul offers us these words,

“For I received from the Lord what I also passed on to you: The Lord Jesus, on the night he was betrayed, took bread,  and when he had given thanks, he broke it and said, “This is my body,which is for you; do this in remembrance of me.” In the same way, after supper he took the cup, saying, “This cup is the new covenant in my blood;do this, whenever you drink it, in remembrance of me.”  For whenever you eat this bread and drink this cup, you proclaim the Lord’s death until he comes (1 Corinthians 11: 23-26).”

The bread of the communion service or Eucharist is a central focus of Christian belief and worship.  It unites all Christians in “communion” with God and each other. This simple act of breaking and sharing bread links us as believers to one another, to Jesus as our Lord, and even to Christianity’s Hebrew roots.

Jesus took the bread, and in the Jewish fashion blessed it and gave thanks, perhaps with the words: Barukh ata Adonai Eloheinu, melekh ha’olam, hamotzi lehem min ha’aretz. He then broke it and told the disciples that it represented His body which was to be broken, and to eat it in remembrance of Him. The bread (seen to be linked to Passover) would have been unleavened for the festival.  It was baked un-risen to remember and mark the fact of the Jew’s hurried departure from bondage in Egypt.  It was a symbol of emancipation – they were now free.

Jesus in His words to the disciples transforms the symbol.  No longer will the bread merely be for physical nourishment, nor was it to be a Passover loaf linked to temporal freedom.  He said, that believers would be partaking of Him, and His sacrifice.  He would be our new “Bread of Life.”  We are indeed to be free, a freedom from death and sin. True freedom! This new loaf, in Jesus’ broken body, is unlike the Passover bread. It did not remain “un-risen!” Hallelujah.

Here is another variation of Irish Soda Bread, and one that is really good with butter, margarine, soft cheese, or jam. This is a lighter loaf than the classic recipe, and I have found that it slices better and holds up more to buttering. It has a slightly less “whole food” taste, but definitely not the flavour of store bought white “bread.”

Preheat oven to 200 C/ 395 F.  Lightly grease a loaf pan and dust with flour, then set aside. In a large bowl sift together the dry ingredients (sifting isn’t that important in the classic variations, but for this one it does make a difference). Add the oil and buttermilk and begin to mix with a spoon.  As it begins to become a dough add a small amount of extra flour and knead by hand.  Knead until it form a firm but pliable consistency,(adding flour if needed). Press into the prepared loaf pan, and cut a single length-wise grove in the centre of the loaf. Place in oven for 25 to 30 minutes (depending on oven). Remove from oven and remove from loaf pan.  Place loaf onto a baking sheet upside down and return to oven for 5 – 10 minutes. Loaf is ready when a tap on the bottom gives a hollow sound.

This is another variation on the classic soda bread recipe, it is however pressed into a more manageable loaf shape, and has a bit of nuttiness to it. This is a proper bread and not a sweet option (though I do have a cake-like version which I will post at another time).

Preheat the oven to 200 C /390 F.  Lightly grease or oil a loaf pan and dust with plain flour pouring off excess. In a large bowl mix the flours, bicarb, and salt. Then add nut butter and slivered almonds.  Mix well. Then add the buttermilk, oil, and essence and stir with a wooden spoon until firm enough to knead by hand.  Knead thoroughly adding extra flour if necessary to make a firm but pliable ball.  Roll ball into an elongated shape and place into loaf pan, pressing it to fit snugly on all sides.  Place loaf pan onto a baking sheet and put into oven for 30 minutes.  After baking, remove the loaf from the pan, and gently place it upside down onto the warm baking sheet and return it to the oven. Turn off oven and allow loaf the remain in the cooling oven for 5-10 minutes.  Remove from oven, and allow to cool right side up on a wire rack.

Here is a rich, dark variation of the classic soda bread.  It is rye based, and gives a nod to German/Irish fusion. I really like the way the caraway flavours the loaf.

Preheat the oven to 200 C/ 390 F.  In a dry pan at medium heat pour in the caraway seeds until they pop.  Put seeds in a large mixing bowl, and add the remaining dry ingredients.  Add the honey, butter and buttermilk and mix with a wooden spoon, and then knead by hand. Add extra flour as needed to make a firm but pliable ball.  Place on a baking tray and dust lightly with rye flour.  Press into a round loaf shape and cut a few parallel groves in the surface and place in oven for 35-40 minutes.  Remove when loaf gives a hollow sound when tapped on the bottom. I have found that it needs to be checked at 30 minutes but sometimes takes the full 40 minutes to not be doughy in the centre depending on the individual loaf.   Cool on a wire rack for at least 15 minutes.

One of the most memorable foods from my childhood, both in Ireland and the US, was fresh soda bread.  This was a part of my culture, but more importantly it was something done as a family.  I remember making it with my mother, and being around when it was made by my aunts and grandmother, and it is something I continued to make with my own kids.  This is a simple bread, with little fuss, and no long lead times for rising. Buttermilk is becoming much easier to get hold of in the UK these days, but I do remember visiting my aunt in Reading a few years ago and finding she had a ready supply of whole milk soured with a spoonful of lemon juice on hand for her bread-making.

Preheat the oven to 200 C/390 F. In a large mixing bowl stir together all of the dry ingredients.  Then add the buttermilk, butter, and honey.  Mix well with a wooden spoon and then begin to knead by hand.  Add small amounts of plain flour if needed in order to form a firm but pliable ball.  Dust this with a small amount of flour and place on a flat baking sheet.  Press into a firm round loaf shape and cut 4 or 5 parallel groves into the top of the loaf with a sharp knife.  Bake 30-35 minutes (loaf sounds hollow when bottom tapped). Place on a wire rack to cool.