One of Maria Antonia’s 2020 photo challenges is for a photo on the theme of Greenery.  The picture above I think captures the theme and offers a great contrast with the blue.

Down the Garden Path

Anglesey Abbey is a  former priory about five miles outside of Cambridge. With the closure of the monasteries, the house was robbed of stone and roofing, but was later bought and restored.  and it became the estate of the Fairhaven Family.  The house and its grounds are now owned by the National Trust.

We have made a few trips to the gardens over the years and usually they provide a variety of beautiful blooms.   Some trails in the right season are covered with bluebells and early spring has daffodils.   Our most resent visit was a little disappointing as it was post daffodil (mostly wilting heads) and pre-bluebell.

The gardens also have a large number of statues which make for some interesting explorations in their own right.  So, despite the seasonal variations on the blooms, the statuary is a constant to enjoy. 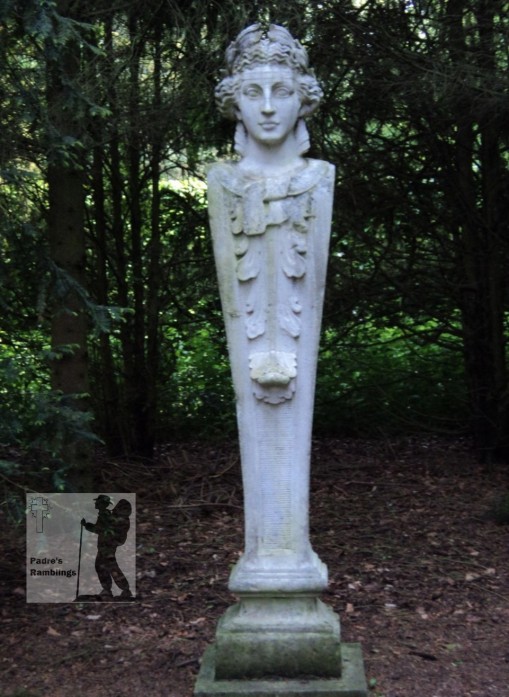 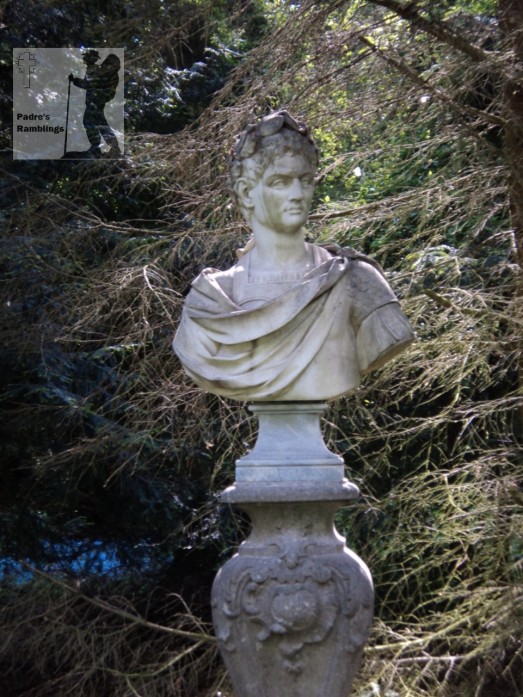 The shop and snack bar are in a modern annex near the entrance hall, and most all of the usual National Trust fare and gifts can be found there.

It has been a while since I made a farm shop post on my Travel Tuesday.  So here is a brief review of the Gog and Magog near Cambridge. I had passed by the G and M on several occasions in the past, and intended to give it a try. So having some errands to run in the area, I swung by the “Gog” as I passed through. TripAdvisor had some good reviews of the place so had high expectations which were largely met.

The cafe is small but has a spacious feel (maybe it’s the clouds on the ceiling) and has really substantial furniture. The staff were friendly, if slightly rushed, but very professional. The cafe was very busy, and orders were being delivered to the dining area, outside tables, and even to some families sitting in the grass enjoying the afternoon sun (This was an early Autumn visit which I am just now getting around to reviewing). 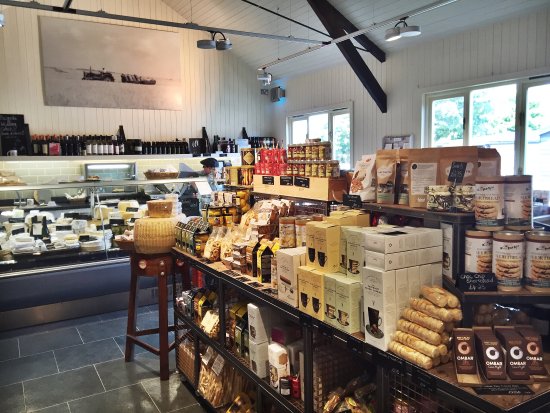 I had a nice latte and a scone. The scone was large and had a good quantity of fruit. While a little on the crumbly side, it was still a quality item, and was delicious with clotted cream and jam.

The dining area also has a central book case which divides the tables.  This is stocked with cookery books, and other materials which can allow customers make the most of their “Farm Shop” experience, and to work out how they will use the fresh meats and veg when they get home.

The adjacent farm shop had really wonderful looking produce and meats, and some super tempting pie combinations (Lamb and Mint, for example). The facility is set up in separate buildings with cheese-monger/deli , butchers, green grocers, and the aforementioned pies, in their own sections. We picked up some chilled pies for home, as well as some hard cheeses and fresh fruit.

All in all this is a first rate place for an afternoon visit.

*I was camera-less on this occasion so have used the G and M’s own pic and one from TripAdvisor.

Grave of Katherine of Aragon

Peterborough Cathedral is interesting for many reasons, but one of them is the fact that it is the resting place of post-Reformation queens.  Not only this, but it is also a unusual as it is one of few Anglican churches which still celebrate occasional Catholic Masses.

Henry VIII had in his youth been a staunch Catholic, and an opponent of the Protestant Reformation.  He was even given the title “Defender of the Faith,” by the pope. He has, however, a pragmatist. He had married his brother’s widow, Katherine of Aragon, in part to cement the Spanish alliance. She gave birth to a daughter, but failed to provide a male heir to the Tudor dynasty.  This combined with other considerations such as the need for money, and the power of the Catholic Church in the affairs of England. Henry, therefore broke with Rome, proclaiming himself head of the Church of England.

This allowed him to divorce Katherine, and set her aside.  She was given an estate in the countryside, and lived out her life holding to her Catholic faith, and was noted by many for her piety.

Katharine died at Kimbolton Castle in 1536, and was buried at Peterborough Cathedral.  Her resting place is marked by an engraved slab, and is marked Katharine’s heraldic symbol, the pomegranate. The fruit had become her emblem when she was Princess of Spain, as it symbolised fertility, and the hopes for a dynasty. 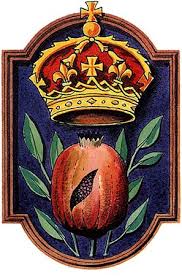 The second Catholic queen who was buried at the cathedral was Mary Queen of Scots. Though her remains have been re-interred elsewhere, Mary was initially laid to rest in Peterborough. 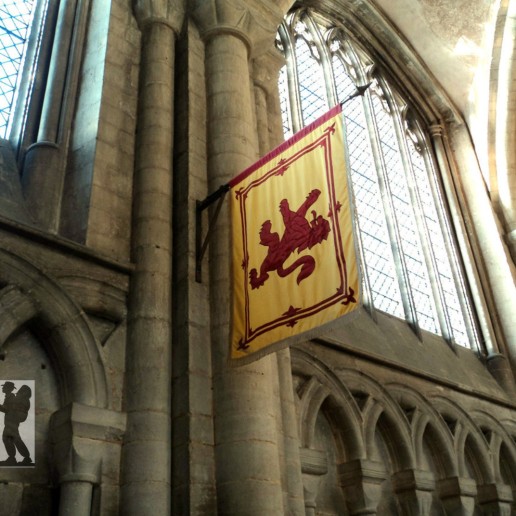 She had come to England in 1567 after having been forced to abdicate the Scottish throne by her Protestant subjects. She was given a sort of asylum by her cousin Elizabeth I, but was essentially a prisoner in various houses and castles across England. In 1586 she was charged with plotting against Elizabeth, and was beheaded at Fotheringhay Castle near Peterborough in 1587.

The chapels and burial sites within the cathedral are brilliant pieces of history, both of the religious and political struggles of the Tudor period, but also of the lives of discarded Catholic queens.

It was a pretty early Autumn afternoon, and we had errands to run near Stansted, so decided to make a visit to National Trust’s Wimpole Estate. We have visited before (back in 2013) and while some of what we took in this weekend was “re-visited” much of what we saw this time were portions we had missed before. 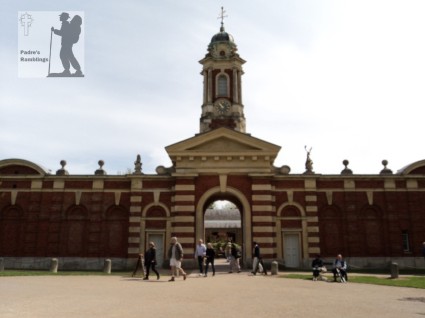 The Hall is the largest house in Cambridgeshire and is the former residence of the Duke of Newcastle-upon-Tyne and later of Elise, the daughter of Rudyard Kipling. 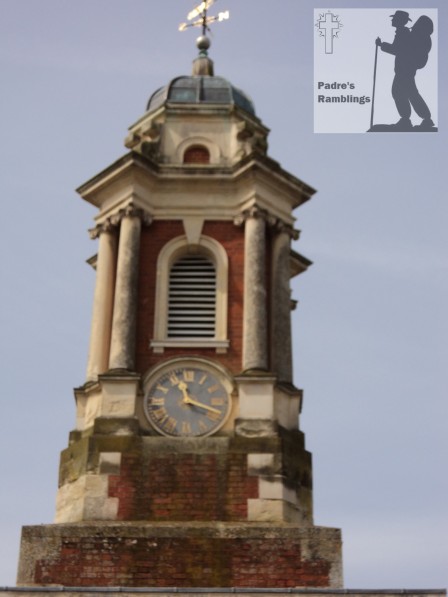 There are hundreds of acres to the estate and paths, fields, and follies are all part of the experience.  Parking is near the old stable block where the national Trust has its ticket office, a small takeaway cafe, and shop.  A restaurant is a short distance away towards the formal gardens.

On the recent visit there was a vendor selling locally produced honey and bees’ wax products in the stable block area.  There was also a small garden centre, and a woman using a spinning wheel and selling woolen knit products.

The gardens include areas by Capability Brown and other noted landscape artists and gardeners. I found the formal beds absolutely beautiful.

The house itself is huge, and extremely grand. At first glance I assumed it was Georgian, but it is cited as being 17th Century in its construction.

It has libraries, a lovely chapel, and many other “must see” features inside.

As is our custom we had a couple cups of tea and a scone at the cafe. In this case it was takeaway in paper cups, and a cheese scone which we had in the stables courtyard.  Later we went to the restaurant where we had a Stilton soup  which was thick and tasty and some very nice granary bread with butter.

This is a splendid place to visit, and well worth making a day of.