“Take this blood,” the pelican said.

“It is from myself that you shall be fed.”

And the Lord he did say the same:

Redeeming us by His own pain.

So when we gather to receive the wine,

Let us remember that sacrifice divine 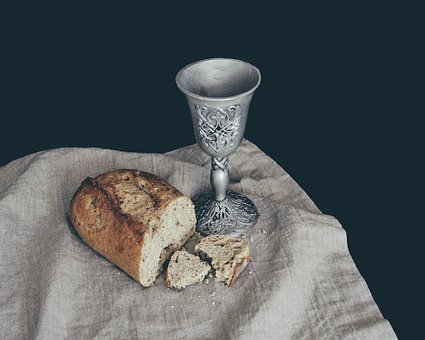 Give us this day, our daily bread

A portion of the Bread of Life

Feed our souls with your great love

And fill us with your everlasting Light.

By grace the bounty multiplied

Expand your bread in us as well

To become your worthy bride.

Give us this day our daily bread

Our souls as one combine.

The bread of the communion service or Eucharist is a central focus of Christian belief and worship.  One the night that Jesus was betrayed  ” . . . he took bread, gave thanks and broke it, and gave it to them, saying, “This is my body given for you; do this in remembrance of me. (Luke 22:19 NIV)” This statement which unites all Christians in “communion” with God and each other, has also divided us, however.

The Roman Catholic church has long taught the doctrine of transubstantiation, in which the bread become “through a spiritual mystery” the literal body of Christ.  The conveying of divinity upon the host during the Mass changes the nature of the bread into Christ himself.  The Catholic practice of bowing before the host, and the care taken that not even a crumb go to waste reflects this belief.  It also explains why Catholics go to the altar rail to receive the host.  It would be disrespectful for the Lord or lords, and King of kings to have to come to His subjects.

Others, such as Lutherans and some Anglicans, hold that the bread undergoes consubstantiation, where the bread while remaining physically bread, nonetheless takes on the spiritual identity of Christ.  It is bread, but spiritually Jesus.  Here too, worshipers go to the Lord rather than He to them.

Many evangelical Christians and other Protestants see the bread as a “representational presence.”  It remains bread, and only symbolically calls believers to remember Jesus and His sacrifice.  As such, it is common for many churches to have ushers or others take the bread to the congregation.  It if nothing else is quick and efficient, and often provides more time for the word.

I am not here going to comment on the merits (or otherwise) of these interpretations, but rather to see what links us.  Jesus took the bread, and in the Jewish fashion blessed it and gave thanks, perhaps with the words: Barukh ata Adonai Eloheinu, melekh ha’olam, hamotzi lehem min ha’aretz. He then broke it and told the disciples that it represented his body which was to be broken, and to eat it in remembrance of Him.

To me this is central – we partake with Him, we remember Him,  we are made whole through Him.  In Luke 24:13-35,  Cleopas and another disciple were travelling to Emmaus on the day of Christ’s resurrection.  Jesus joined them on their journey, yet neither recognised Him.  They discussed the crucifixion, and the reports of resurrection, and still didn’t recognise Him.  After this they stopped, and shared bread.  “When he was at the table with them, he took bread, gave thanks, broke it and began to give it to them. Then their eyes were opened and they recognized him, and he disappeared from their sight. (Luke 14:30-31 NIV)”

Let each of us use the bread (whatever our interpretation of Jesus’ words) to remember Him, and to have our eyes opened to Him.