Han Lo had never been much of a monk.  He had been lax in his martial arts exercises, and he could never meditate without his mind wandering.  It was no great surprise then, that he was the least adept of those who finished the training.  He did, however, pass and earned his grey robes.

The problem was that the Abbot couldn’t find a single job for Han Lo to do within the monastery.  He was and abysmal cook, and was so poor a gardener that his fellow monks said, “he could make a waterlily die of thirst.”    They played on that idea and many called him “The Smoldering Lotus.”

In time Han Lo was offered the opportunity to become a travelling monk, bringing comfort to the people of isolated mountain communities.  The position was in reality just a last ditch attempt by the Abbot to find a way to employ the inept monk.

The problem was that Han Lo wasn’t particularly good with people either.  So when he came into the mountains, he hid the nature of his assignment.  Rather than visiting the ill or grieving he told the mountain elders he had been sent to do a remarkable thing.  He was to be their protector from dragons.

Han Lo was satisfied with the ruse.  After all no dragon had been seen in those parts for a thousand years.  He just set back and accepted the daily offerings from the community, and occasionally made dramatic shows of poorly executed Karate, explaining they were special moves designed for battling the fire breathing beasts.

Then one afternoon word arrived that the village of Win had been burned to the ground, and the few surviving refugees described the huge lizard like beast that had meted out the destruction.

The elders all gathered at Han Lo’s door demanding he do something.  It being his “calling.”

Reluctantly the young monk agreed, and said he would first need to gather some things.  Looking around his cottage all he could see that looked impressive was a small wooden box from the table next to his bowl and chopsticks.  He picked this up and tucked it purposefully into his robe.

The entire population of three villages gathered to see the “Dragon Fighter” head into the hills.

Han Lo quickly learned that there was something else he was not good with – heights.  As he travelled the narrow pathways upwards he noted the sheer drops flanking his passage.  With one eye closed to try to minimise the view, he continually repeated the words: “You do not need wings to fly,” in an attempt to calm himself.

At last Han Lo crested a peak to come face to face with the dragon.  The man had absolutely no idea what to do next. He then remembered the box he had picked up from his table.  Though he was sure he was about to die, he gambled all.  Opening the wooden box he grabbed a handful of its contents and threw it into the face of the beast.

As the pepper hit the creature it reared, and then gasping let out a huge sneeze, blasting a massive flame skywards.  Han Lo then rushed forward and dumped the remaining pepper into the dragon’s nostrils.  It again sneezed, though its flame was greatly diminished.  As it prepared to sneeze again, the monk dodged out of its path, but a small stream of ragged fire singed his robes.  The dragon continued to sneeze uncontrollably and the continued convulsions extinguished the last of the beast’s flame.

Gaining its composure, the dragon tried to squash Han Lo, but the monk jumped on the creatures back to avoid the fall of its foot.  Much to Han Lo’s distress the dragon began to fly. “You do not need wings to fly,” the young man repeated to himself.  The dragon tried to shake him off, but in the end settled to the earth exhausted – right in the centre of the village square.  Panicked villagers scrambled, until they saw the charred form of Han Lo sliding off the creatures back.  The men ran forwards and collectively bound the beast.

Han Lo was a hero, and renouncing his vows established his own dragon fighting business – Smoldering Lotus Enterprises. 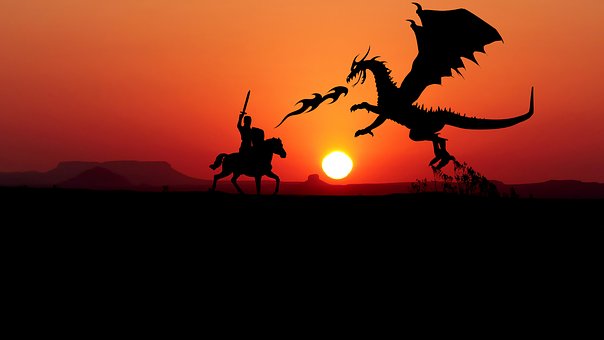 For the Drake’s mighty tail?

On steed of white –

How did you fail?

Amid that tragic struggle –

George lay there with a sleeplessness brought on by the knowledge of the conflict he knew would come.  He stared at the dragon effigy hanging in his room.  It was a symbol and reminder of the coming battle.

“How had it come to this?” he wondered. “Was it when the aged, grey-haired woman had given him the dragon image? Or was it years before, when she had insisted that it was imperative that his mother give him his particular name?”

He lay quietly.  He knew that he needed his rest. “How can I face the next day without rest?” he tried to remind himself.

Suddenly there was a roar from somewhere beyond his door.

“Georgie, sweetheart.  Turn off your light.  You start kindergarten tomorrow.  Granny will come see you off too,” Mommy called.