It wasn’t exactly a Moses scenario, but the bush was burning. Not a single plant, but “the bush” was on fire. It seemed an innocent enough thing to do. After all the wasp nest was a hazard. Who knows what damage could have been done by that evil brood.

Sam knew what to do. He had seen it on a YouTube video. All it would take was a spray can and a lighter and presto – an instant flame-thrower.

Did I mention that the wasp nest was a hazard. Well, it seems not as much as a sixteen-year-old with a flame-thrower. Forty acres went up in flames. But hey. No more wasps.

No one doubted whether Fire was alive.  He had all of the characteristics of life.  He breathed, consumed sustenance, moved, and reproduced.   Of all of the elemental beings, he was the most familiar and relied upon, by the people of the plain.

Fire’s sister, Air – was so complacent when compared to her brother.  She was so ubiquitous, that only in her fits of anger, like in the case of the great spiral wind of the year before, did the plains dwellers ever acknowledge her.  In truth, though often outside of their conscious thoughts, all reverenced her; and all feared her rare absence.  Her brother, Fire was dependent on her.  It was said that without her, he, like them, would perish.

Their mother, Earth, was a servant (and at times the mistress) of the plains folk.  They worked the land which was her body, and she rewarded their labours and devotions by bringing forth bounty.

Earth had a lover, Water.  He had flattered her from her youth onwards.  Their flirtatious relationship unfolding in the give and take of the faraway tides.   But here on the plain, he was a respected visitor who made only periodic calls on his mistress, Earth, as he fell sedately from the sky the realm of his daughter, Air.

So life on the plain went on.  But Fire wanted more.  He wanted ever greater power and respect.  He was jealous of his father, Water.   Why was this fickle, often absent consort of his mother so revered by the plains people?

In his displeasure he did his best to court the favour of the people.  When the old one made his visits, and left the people cold and wet, Fire warmed them, and dried their clothes.  Yet, the plains people still cried out for Water’s return  They even offered up prayers and sacrifices for him to come again.

At last Fire had had enough.  Had he not warmed their homes, cooked their food, and given them light at night?  So why did they call on his unreliable father?  Fire would show this ungrateful people his power.  If they would not love him, they would have to fear him.

Fire started his display with a slow smoldering in the stubble of the harvested fields.  He then called upon his sister to fan the fields, and he burst forth devouring all before him. Barns and homes soon were consumed in his fury.  The plains folk ran before him seeking refuge from his wrath.

The people crossed a wide gully and clambered up the hill side, spying the devastation below.  Many cried, and prayed for salvation.

Then above them dark towering clouds formed.  Flashes of lightening split the sky, and sheets of torrential rain lashed down.  The gully they had crossed began to fill.  The puddles became rivulets, the rivulets – streams.  Soon a mass of surging water rushed up the gully towards their burning homes.  Them the flood raged over the entire village, extinguishing the flames.

As quickly as the storm had begun, it dissipated.  Though charred, most of the structures were salvageable, and some even intact.  Five barns full of the winter grain store were intact.

The Shaman called the people together and in a collective voice sang praises to Water. 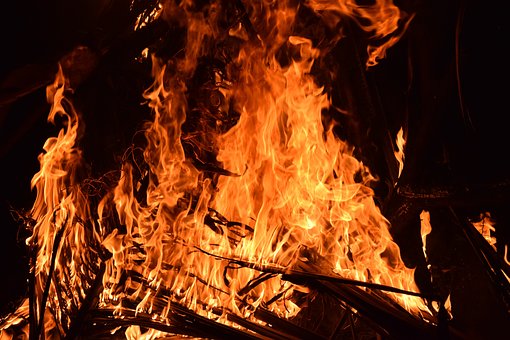 Was it blessing or curse?

Our homes to warm –

Our meals to prepare –

Or unleashed to scare –

Our very beings with its –

Be it a Pudding Lane Bakers-

Who charred London by acres –

And even now with new plumbing –

We’re still not fully in control –

They say that bread is the staff of life –

Which without you it is but seeds of hay,

We seek comfort and shelter

Which without you are merely clay.

To your warmth and brightness

As you turn our nights to day.

And hold the cold and dark at bay.

Written for dVerse Fire Up