Here is another keto friendly cheesecake which is a little richer, and has some optional twists.  It is lovely without the “mocha” touch, but I kind of liked it with the coffee.

Preheat oven to 200 C/ 400 F. Melt 2 tablespoon of butter and mix in the ground nuts to form a crumbly paste. Use a fork and line the bottom of a small oven dish with the mixture. In a bowl beat the egg thoroughly, and then cream in the sweetener, cream cheese, and ricotta.  When evenly mixed into a thick liquid stir in the coffee (is used), and cocoa, then pour it over the nut crust. Place uncovered in the oven for 20 minutes, then increase the temperature to 220 C for ten minutes so that the surface starts to caramelise but not burn.  Remove from oven, and allow to cool to room temperature, then chill.  Makes 8 medium pieces.

*pictured cake is a smaller one made using the same proportions.

Many people have a love/hate relationship with gluten-free products.  It may be that some have a reputation of being “cardboard.” But one gluten-free category does have some flavour merit: Pasta.

Gluten-free pasta is incredibly variable however. It can be made from rice, corn (maize), potato, tapioca, and a broad range of other “friendly” starches. In addition, the cooking time can vary between 3 and 12 minutes.

Other considerations are the fact that most gluten-free pasta does not reheat well. This creates a situation where you need to cook less of it to avoid left-overs, or overeat, or throw-away.

In my experience the size of the packaging seems to promote “left-over” uncooked noodles and such. This led to a wide range of partial packages in the cupboard, any of which were less than a full serving size, and with the aforementioned cooking time variation, it was potentially waste.

That is where soup comes in. These miscellaneous partial pasta portions make a great “soup stretcher.”  I take the various noodles, shells, and tubes and break them into similar sized pieces. These are stored in a single large Kilner or Mason jar and a large handful can be added to the soup maker when the favourite recipes are being made. This adds some volume to the mix, and as it is stewing for a considerably longer time than the recommended cooking time, the pasta either makes a “noodle” element to the soup, or dissolves to thicken the broth.  All in all a win-win, as it uses surplus pasta, and makes for a heartier soup. 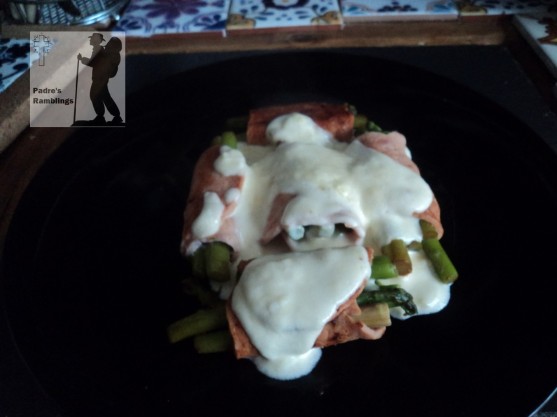 Here is a dish which combines asparagus and turkey bacon. It has a few steps, but is still easy and relatively quick to make.  It is gluten free, and low carb as well.

Remove woody bottoms from the asparagus and cut into thirds. Place the asparagus into a steamer and steam for 5 minutes. In a medium frying pan warm  the bacon, but do not fully cook. In a sauce pan melt the butter, and then melt the cheese into it, stirring constantly then slowly stir in cream. Remove bacon and cheese from the heat.  Lay out the bacon strips and place a few asparagus pieces to one side of each then roll the bacon around the veg. Gently place each roll into the bacon pan and brown on each side, avoiding unrolling each bundle. When well cooked place the wraps onto a plate. Quickly reheat the cheese sauce, enough to pour, then spoon it over the bacon wraps, and serve. 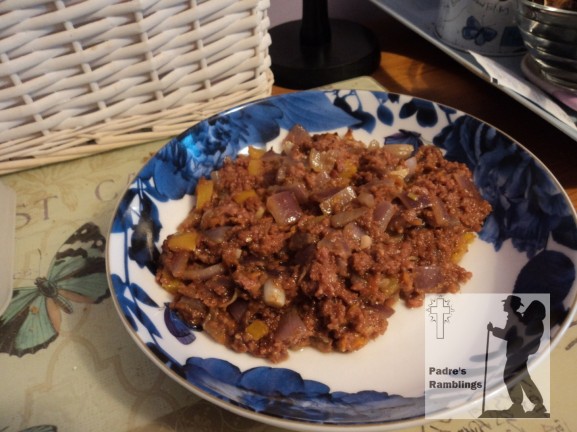 In trying to keep the carbs down in my wife’s diet, I have adjusted my traditional hash recipe to accommodate.  It uses tinned corned-beef, carrots and some savoury veg to make a hearty meal.

Dice the onion, garlic, and bell pepper. Peel and grate the carrot. Heat the oil in a medium pan and stir in the veg.  Fry until tender, and chop the corned beef into the pan.  Crumble the stock cube into the pan and add splashes of water until beef forms a firm hash, and season to taste. 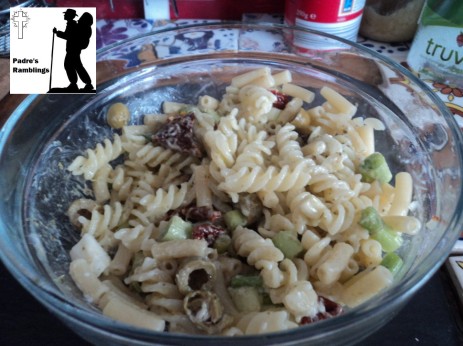 Here is a pasta salad with a bit of a Mediterranean feel.   I am particularly fond of the pesto flavour that accompanies the richness of the sun dried tomatoes and olives. This is a great picnic side dish, or a nice lunch in its own right.

Prepare the pasta according to the manufacturer’s instructions, but leaving it slightly firm. While it is cooking dice the onions, and tomatoes into small pieces and add to a large bowl (including any oil leaked from the tomatoes). Next cut the olives into rings and add to the bowl. Add the capers and stir. When pasta is ready rinse  in cold water and drain very well. Add the pasta to the bowl, and spoon in the pesto and mayo.  Stir very well until everything is evenly coated.  Add salt to taste (I didn’t need any). Cover and chill until ready to serve. 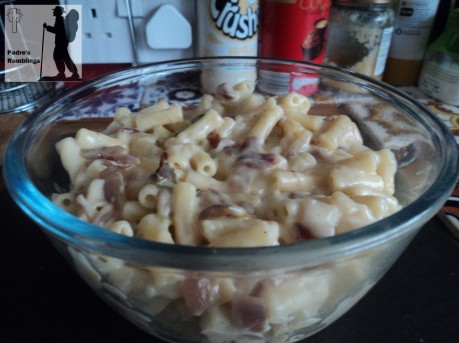 I am a great fan of oven cooked, thick creamy mac and cheese, but in the summer I can’t always face using the oven.  The remedy is a stove top recipe which is rich and creamy, and “cooler” to make.

Prepare the macaroni as per the manufacturer’s instructions. In a medium sauce pan melt the 2 tablespoons of butter, and then stir in the flour until lightly browned. Grate the cheddar cheese and slowly stir it in, adding splashes of milk until the cheese melts and the mixture becomes a thick sauce and remove from the heat.  In a frying pan, melt the remaining butter.  Dice the onions and add them to the hot butter.  Fry until lightly browned and then lightly salt to taste. Grate the goats cheese.  Drain the macaroni and return it to the pan. Stir in the onions, mustard, pepper, and grated cheese and Parmesan. Stir in well, then place pan on low heat add the cheese sauce and cream.  Mix well until the cheese is evenly melted and the pasta well coated. Add additional salt and pepper to taste.

I have posted several summer salads recently, most of which were potato based.  Here is a pasta salad recipe.  It is versatile as a basic recipe, and in the pictured batch used gluten free pasta so I could more readily share it with my wife.  It uses fresh salad standards such as tomatoes and cucumber, and has a fresh taste.

Prepare the pasta according to the manufacturer’s guidelines (using salted water). While the pasta is cooking chop the tomatoes into eighths and place into a mixing bowl.  Dice the onions and pepper into small pieces, and add to the tomatoes.  Cut cucumber into slightly larger pieces and add to bowl. Sprinkle with a little salt, the parsley, and a splash of vinegar and toss. When pasta is cooked run cold water over it to cool and remove excess starch. When well cooled drain very well and add to the veg mixture.  Next stir in the mayonnaise until everything is well coated.  Cover and chill in a refrigerator before serving.

I have always been a fan of noodles, be it Italian pasta, or Asian ramens and sobas. Noodle dishes are generally quick to make, and are filling.  What’s not to like? Well, unless you are gluten intolerant. That is why this rice noodle dish is so wonderful, it is the best of “both worlds.”

Boil 1 cup of water and dissolve the stock cubes in it.  Break the dried rice noodles into two even portions and submerge them in the stock mixture in a large bowl, and add a splash of soy sauce. Set aside for 15 minutes.  While waiting on the noodles, peel and finely sliver the garlic, ginger, and carrot. Then dice the pepper and chili removing all of the seeds. Then remove the roots from the spring onion and any tough outer leaves.  Cut the onions and broccoli into 1 ti 1 1/2 inch pieces. Juice and zest the lime.

In a wok or large pan bring the cooking oil and sesame oil to a high heat, and add the broccoli stir fry for 1 minute, then add the garlic, ginger, peppers, and chili continuing to stir.  Add the onions and 1 tsp of the zest.  Stir again and add the juice, and 1 Tbs of fish sauce.  When veg begins to be evenly soft and cooked well add the prawns while continuing to stir. If the pan begins to go dry add some of the stock from the noodles.  Do not over cook the prawns. Add the noodles including the remaining stock, and stir well, reduce heat an allow to simmer for 2 to 3 minutes.  Add the remaining fish sauce, and soy, and chili sauce to taste.