I was looking for a quick to prepare mains to treat myself with.  I had seen the Sainsbury’s Love Your Veg line before, and the risotto balls seemed to be a tasty way to check it out.

I bought a package, which was convenient in its packaging of two compartments containing three risottos each.  I prepared one half of the pack using the oven at 200 C for 14 minutes, and the other a day later in the microwave for 3 minutes on high.

These balls are 25% rice, and about 10% cheese, the rest being vegetables (carrots, peas, and green beans), herbs, and bread crumb.  The oven baked balls were nicely crisp in their crumb shells.  The rice and veg mix within was a little crumbly, and while having a bit of a herb taste, the cheese flavour was minimal.  Three balls were a decent sized portion.

The microwaved ones lacked some of the external crispness, but were not appreciably different in texture or flavour.

These, while not phenomenal, did provide a nice break from the ordinary.   I think they would make a good vegetarian side dish, and as a main okay in a pinch if time is short in meal prep. 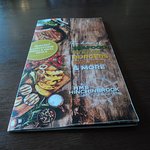 I write about the Hinchinbrook in a previous  post on Great Yarmouth in Norfolk. We have since revisited the restaurant on a couple of occasions, and it seemed that a Travel Tuesday would be a good place for a more thorough review.

This is a clean, well laid-out establishment, with booth and table type seating in the main dining room, cafe style tables near the window, and “sidewalk” seating as well.  The bar is to the left as one enters, and the cooking area is just beyond.  The opposite wall features a room length depiction of the port of Great Yarmouth.   References to Nelson, and the Hinchinbrook are in various places as well.

HMS Hinchinbrook is an especially nice seafood and grill restaurant. The welcome has been warm on each of our visits.  Some of our favourite dishes are the goujon combo with salmon, sole, and plaice.  This was served with a variety of dips and sauces (the garlic sauce was especially lovely), and a huge portion of chips.  The battered cod and chips is particularly nice as well, and is really well fried, and had a firm tasty golden batter.

There are also various grilled dishes available, and as my wife now needs to be super low-carb, the steaks have become a new favourite option for her.

It is a great venue to just stop into if near the Wellington Pier or Sea Life Centre.  It has some nice tea and coffee as well.

All in all, this is really high quality seafood restaurant, and it offers great value for money as well.  The service is always excellent, and we really enjoy our experiences there.

This is a rubbish piece. There, I said it.  It is essentially a Green agenda film with a dystopian twist, in the guise of a Bible film.  It has a man named Noah [check], three sons (Shem, Ham, and Japheth)[check], pairs of animals [check], and lots of water [check]. Apart from that, it is so far from the biblical narrative that it is otherwise unrecognisable.

Examples include angels who are in the form of stone giants (who essentially construct the ark), and a stowaway Cainite king. Noah is depicted as a man who has his own interpretations of God’s will and as such neglects bringing wives for his two younger sons, and is prepared to murder the newborn children of his eldest son in order to rid the world of men.

The acting by Russell Crowe (Noah) is all too one-dimensional as a man obsessed with both saving animals and his own agenda, that he lacks any other show of emotion. Ham (Logan Lerman) is in contrast filled with a mutinous spirit, and in a sense becomes the new Cain, with his killing of the stowaway. The best acting comes from Emma Watson, and Jennifer Connelly as the wives of Shem and Noah, they at least show real human emotion.

In a plot twist, he questions his own mission and spares his twin grand-daughters thus providing potential wives for Ham and Japheth (even if totally biblically inaccurate and merely suggested).  The essentially ends with Noah’s drunkenness, the exile of Ham, and “new beginnings.”

If you have two hours to kill, then maybe worth the watch.  If you are seeking a spiritually uplifting experience then build an ark of your own to avoid this modernist deluge.

The Life of Christ, or the original title La vie du Christ is a “costume drama” depicting the birth, life, and death of Jesus. It runs for a little over a half an hour, and for a film made so early into the media form it is rather well done.

It is constructed in a couple of dozen individual scenes of various lengths, and each introduced by a title card. As a rather old silent, black and white production, there are some variations in the quality of the picture, but the extant footage below is still incredibly watchable.

I could find no credits for cast or crew beyond that of the director, Alice Blaché, but some of the acting is first rate by the standards of the short reel age it was made in. Some of the nuance is really good, especially for the biblically literate (thus able to identify points which are not titled). Examples of this include Pilate’s wife making gestures of appeal to her husband, and Peter’s denial of Christ is emphatic in its gestures. The cast is fairly large with women, children, and ethnic minorities included, and not necessarily stereotyped in their portrayals.

The opening sequence is the “Holy family’s” arrival in Bethlehem. This has all of the hallmarks of primary school nativity plays, but with a larger cast, and establishes early that “there is no room in the inn” by other families being turned away before the arrival of Mary and Joseph. The heartfelt appeal of the heavily pregnant Mary falls on deaf ears of the inn-keeper, but a Roman shows the couple to the stable.  The arrival of the magi soon follows, and a real baby is used in the crib. Here again a large cast makes for some spectacle.    This is not the traditional 3 kings approach, but a parade of wise eastern figures and their retainers. This I find biblically refreshing as it makes the number of magi indistinct, though the three gifts are highlighted.

The French Catholic tradition is evident in several places in the film, but one of the earliest is a brief segment where the sleeping infant Jesus is watched over by an angelic band, complete with wings, harps, and violins.

There is a rapid transition to the ministry of Christ. No reference of the childhood visit to Jerusalem, or of His baptism is made, but it leaps into events of His adult life including the Samaritan woman at the well,  Jairus’ daughter, and Mary’s washing of Jesus’ feet. I can only speculate at the reasons for the choice of events in the drama. I wonder if it is because Blaché was the world’s first female director, and the opportunity for woman actors to be featured was part of her selection.  The pieces are nevertheless well done.  The detail in the Magdalene scene is excellent with the use of her hair as a towel, and care use of scriptural detail.

The film next proceeds to “the passion” a Century before Gibson’s exploration of the theme. The Catholicism of both films is marked. This is not to say that it lacks a true rendering of the Bible story. The adoration of the crowd is well presented in the Palm Sunday scene.  Worshipers wave palms, and place sheets in the road of the coming Messiah. The Last Supper follows (with no reference to the intervening 4 days) but only eleven disciples are seen in the clip.  At first I wondered if Judas is excluded, but it seems by the action, and following scene, that he is indeed there.

In the Garden, Jesus is comforted by an angel, and the disciples sleep. When Jesus is taken to Caiphus, there are women and children in the hall, but the testimony of false witnesses is clear. It is the trial by Pilate which is really outstanding, though.  Pilate’s wife appeals to her husband, Barabbas is released with obvious joy, and Pilate washes his hands of the situation. In the ecce homo segment, it is a wonderful precursor of the 1977 Jesus of Nazareth film , in fact the later film can almost be seen as a colour copy of this 1900s film, as the imagery is so similar.

Without labouring the remaining scenes one by one, notable points include the scourging of Jesus to His chest and stomach rather than the back, the thieves carry only cross bars to Calvary, while Jesus struggles with an over-sized cross, and there is a clear addition of the Veronica story in this version, complete with a focused still of the face of Christ on her towel. Jesus is later lowered from the cross directly into a shroud.

The burial is in a cave, and the resurrection is over dramatic with the Roman soldiers actually witnessing it.  The women come to the tomb on resurrection Sunday to be greeted by angels, and the film ends.

While this review has been full of “spoilers” the story is all known, so I haven’t really given much away beyond comments on the approach of the film-maker. This may not the the absolutely first cinematic representation of the Saviour’s life, but it is a remarkable one for its time, and one which colour, sound, and modern make-up techniques have not improved on much.  It is a tribute to Blaché as a pioneer and her wonderful depiction is well worth seeing.