Is that the dusty wind
that from West has blown?
From places turbulent and forlorn it comes.
My mood darkens as the
sky is thus obscured.

Dust, my dry nostrils fill.
Sand gets in my eyes.
So fine is the powder, that I cannot block
its bite, no matter how
I might dodge or try.

Lord, let this wind die down.
Let the sun return.
I would rather sweat and have a sunburned face,
than my mouth filled with sand.
Lord, it’s in your hand.

‘is blown from the sky’ from “The Springtime Plains,” by Charles Badger Clark 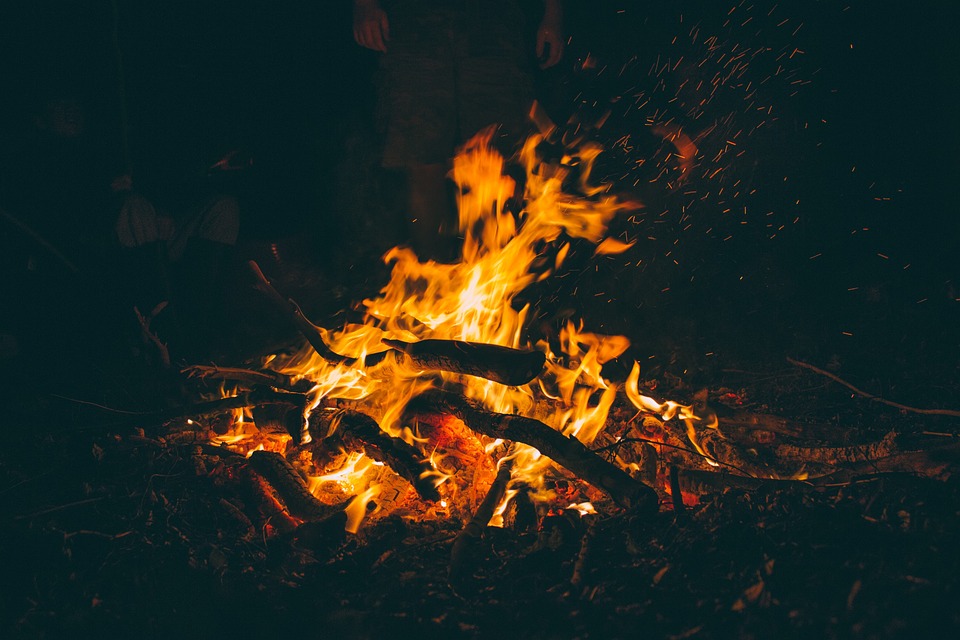 “Was that a wolf?” Elroy asked.

Both men cocked an ear to catch the sound again.  It was a moan, like an autumn wind high in the lonesome treetops.

“Well, whatever the hell it is, it’s spooking the horses,” Dillon observed. “Maybe, you should go calm them a tad bit.”

“I reckon, I might could, but why don’t you do it?” Elroy responded.

The whining moan again echoed in the night.

“Well, Elroy, it’s on account of you being better with critters than me.  Besides, I’m the better shot,” he said holding up his rifle, which he was gripping white-knuckled.

As the two lawmen debated on who should step out from the light of the fire, their quarry – the notorious Travis Jackson, lay in a nearby gully blowing over a bottle.

This week Jim Adams has called upon us to write about a song which is about making the choice to “Come/Go/Leave/Stay.”  The song Git Along Little Dogies gives dogies (orphan calfs) encouragement to move along.  Roy Rogers sang the song in 1940, and it has been recorded on several times since. 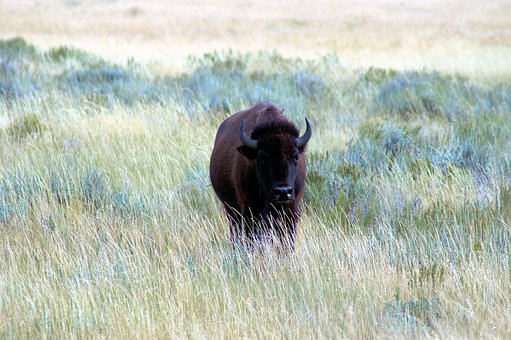 Across the wide prairie –

With plough and rake.

Image by Pezibear from Pixabay

Oklahoma Brown was pushing the herd on wards.  Dust clouds rose high into the air despite the lush grass and wild flower cover.  Two thousand head had a way of doing that.  Brown had been with the Ridgemont Company for about a year, and he found the work satisfying.

As the dust cleared, Oklahoma caught a glimpse of a stray calf hanging back from the drive.  He swung his horse about, and went to hurry the little animal along.  There was something about the little orphan that touched his soul, however.   Despite his better judgement, Brown dismounted and bundled the calf into his arms, then placed it in front of his saddle.  He then mounted and rode on to catch the herd.

“Hey there little dogie,” Brown said soothingly to the animal which now rode straddled across his lap.  “You know you and me got a lot in common.  No momma, or place of our own.”

Yes, Oklahoma Brown did have a lot in common with the little calf, and there was something comforting to the cowboy about that.  For the first time since coming West, Oklahoma felt a connection to someone, or at least something.

“Come West?” I hear you say.  Yes, Oklahoma was born Lester Brown in Newark, New Jersey.  He was orphaned at fourteen and made his way to cattle country by way of Cincinnati and then St Louis.  “Oklahoma” – he thought – just made for a better name for a cowpoke than Lester.

It was the talk of the entire community.  Sam Welkes was getting a new cook stove all the way from Chicago, Illinois.   For Sam and his wife, Lottie, there was not going to be any more of that hit and miss cooking over open flame at the hearth.  No they were going to have balanced baking, and even winter heat.  Yes Sir, it was going to be the best thirteen dollars Sam ever spent.  Only problem was he had to go to the railroad station in Missoula to get it.  Oh well, what’s another five days by wagon when you have already been waiting since April?

Obadiah Brown scratched at his shaggy beard, and then continued to lead his mule, Bessie down the mountainside.  It was a bright spring day, and the warm sun on his face was a welcome relief after a harsh winter in his remote cabin.  It had been a long winter as well, and seemed especially so since his trusty dog, Beast had died in late November.  Bessie was good enough company, but failed to be much of a conversationalist, nor did she have Beast’s knack for at least feigning interest in what Obadiah had to say.  But now it was trading season and Brown was bringing his stock of furs down to Pierre’s Hole.  Obadiah was still yet to see another human being, but he smiled as fences and a herd of horses came into sight.  Company, a shave, and fresh supplies were only an hour away. 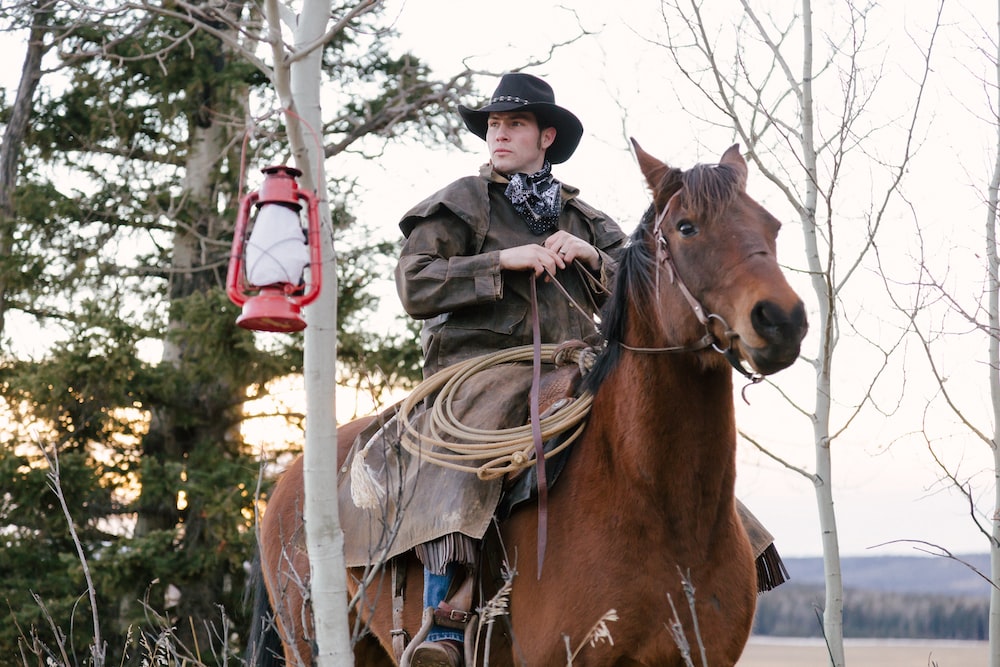 A lone rider blocked the road.  His neckerchief was still tied loosely around his neck, and there seemed to be no indication that he would even try to hide his identity.  The stage driver and his shotgun rider weren’t going to take any chances however.  The scatter-gunman leveled his piece at the stranger as the driver slowed his progress but did not stop.

“Whoa there, Pard,” the dust covered rider called out, raising his empty hands into the air.

The driver and his comrade quickly scanned the surrounding area for any would-be accomplices.  Seeing none, the driver brought the coach to a halt.

“What in tarnation are you up to?” the driver called.

“Just trying to save you and your passengers a heap of bother,” The man replied.  “Things is bad up in Santa Anna.  Some desperadoes hit ’bout a week ago, and folks that way is mostly left town or taken to the hills.  I hear tell, that both the mayor and the marshal had untimely ends.”

“I reckon we’re right beholden to ya for the warning, Stranger.  How did you come to hear of it?”

“Well you see it’s this way,” the stranger said, as a dozen men climbed out of a gully with rifles leveled. “Me and the boys here might justa had a little hand in Santa Anna’s misfortune.  Now if ya would put that shotgun down slowly like and get the silver shipment down for me, I would be much obliged.”

This week Jim Adams’ Sunday Song Lyrics prompt is Wild West.  In particular he has challenged us to use songs with Cowboy/Gun/Hat/Horse/Western as their themes.

Tiomkin and Washington’s High Noon is one such song.  It is the theme for the 1953 film of the same name.  The original performed by Tex Ritter.

The films plot, and thus the lyrics are as follows:

Marshal Will Kane has gotten married and is retiring as a lawman.   Just as he is preparing to leave the town of Hadleyville, New Mexico word comes that the desperado Frank Miller has been released form prison, and he is on his way to get his revenge on the former lawman.   The ex-marshal tries to put together a group of deputies, but the people in their fear of the outlaw leave the brave Kane to face Miller and his gang alone.