Into the teeth of the enemy

There are those who will risk certain death

All for the idea of glory

But the race is not always to the swiftest

Or victory assured to the brave

To those their live’s for tomorrow’s battle save

My brother and I never saw eye to eye.  Whether it be religion, politics, or even sports teams we couldn’t agree.   Sometimes it seemed that if I said it’s night, he would say it was day.  These divisions continued well after childhood, and it led for us living on opposite coasts and following very different lifestyles.  Sometimes I miss him.  Not the arguments, and definitely not the occasional fisticuffs, but rather the sense of belonging to someone – being a brother.  After all we share the same blood and history.  But I know full well that we will never have a relationship even now that we are entering a latter years.  Those bones of contention are quite real to this day, and sometimes the great bones of my life feel so heavy.  I wish they would lighten, and that I could see my brother again.

dVerse – Prosery: ‘Sometimes the great bones of my life feel so heavy.’ (Spring Azures from the book Wild Geese by Mary Oliver.

A hotel elegant was the Toyland Spa

It was the place where best dolls went

To pamper their porcelain skin

Life had never been easy along the embankment. Eel-fishers and boatmen made their lives in the cramped dwellings clustered there. That was in the “good old days,” before the river began to silt over.

Now the channel is far from navigable, and even the poor fishermen and boatmen have moved away leaving the embankment to those even more unfortunate and downtrodden. The houses are increasingly rundown and only those with no other place to stay will even attempt to dwell there.

“What about that huge oak?”

“Is that pretty little well over there enchanted?”

“No, but I always found that the water from it was particularly nice.”

“That fairy ring must be the place,” Miriam said pointing to the circle of red-capped mushrooms.

“Darren Weaver, I’m starting to think that you brought me out here on false pretenses.  You said you were going to show me an enchanted place.”

At last they came to a small clearing which held a rather unremarkable moss-banked pond.

“Here?” she asked, scrunching her nose.  “It doesn’t look enchanted to me.”

“Look in the pool,” he instructed.

“All I can see is my reflection,” she said.

“And what could be more enchanting than that?” he said handing her a daisy. 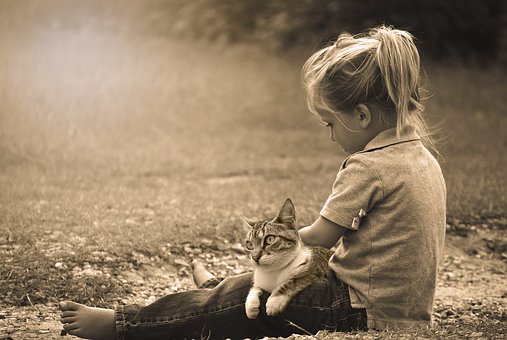 Deidre loved cats.  In fact, love was an understatement when regarding her attitude to anything feline.

Her older brother, Donald despaired of having to take his sister anywhere.  He was often late to school when he accompanied her, because she would stop to stroke some stray she had met along the way.  Going to the mall was no joy either, as he could seldom pry her away from the pet shop in order to do anything he would like to do.

It was with great trepidation that he agreed to keep an eye on Deidre when the family made an outing to the zoo.  Mom and Aunt Harriet told him that they would give him ten pounds for his efforts though.

Donald grabbed her hand and pulled the resistant eight-year-old to his favorite exhibit, the monkey house.   Donald was just winding up the howler monkeys into a fever-pitch when he noticed that his pain of a little sister had wandered off.

He knew exactly where to find her, however, and made a bee-line to the cat house.  As he entered the building,  he heard a joyful squeal from Deidre.

There was no time to inquire to what this exclamation, which was delivered in a very rapturous tone, referred however, as he noted that his sister was on the wrong side of the glass in the leopard enclosure.

Page & Line Challenge #1: “For this challenge, grab the book you’re reading or a random book off your shelf and turn to page 182 (or location if you’re using an ebook). Scroll down to line 16 and write a story using that line somewhere in it. Be sure to share the original line along with the book and author.”

This week Jim Adams’ Song Lyric Sunday challenge was to write about a song containing personal pronouns.  Billy Joel’s She’s Always A Woman does just that.  She, her, me, and you all feature in this 1977 hit from The Stranger album.

François pointed to a spot on the other side of the valley.  He and Alexandre had set out from their two cabin base-camp three days before.  They were now hopefully in the home-stretch of their return journey.

Things had not gone well for them.  They were only an hour out when they surprised a mother bear tending he cub.  The dogs went wild, and Tacheté had barely escaped a mauling.  He shot off into the woods, with the other dogs on his heels.  The intrepid trappers had little choice but to follow them.

It took several hour to round the dogs up, and by then night was beginning to fall.  Therefore, they were forced to make a make-shift camp for the night.  In the night, snow began to fall.  Because of this and being in unfamiliar surroundings, they wandered the next day, and now into the third.

“I am certain it is on that side of the valley,” François said, as Alexandre shook his head unconvinced.

“Are you really sure you even want to go home?” Alexandre asked.

“Why would you ask that?” came the reply.

“Well, the last thing you said to Sophia was, ‘I am taking the dogs for a walk, I’ll be back in a couple of hours.’  You will be in la merde, my friend.“

“Hmm,” François said after a moment.  “Have you ever considered visiting Montreal?”

Hunter Morgan was mighty proud of the new home he had built in the Willamette Valley.   He had arrive in Oregon from Mason County only a few weeks before.  He immediately set about building the house that he would share with his new wife, Mariah, a fellow Kentuckian he had met on the Little Train on the trail.  The couple now stood before the completed structure.

Hunter went to the wagon that had been their home, and took a chair and carried into the house.  He then returned and carried his bride across the threshold, and sat her down on the chair, before returning to the wagon to carry in their possessions.

As he brought items in, Mariah began to assemble them, and put things away.

Hunter brought in the final chest, a straw packed box of dishes that had been given to them by Mariah’s parents.  When it was opened, they came across a framed sampler that Riah had stitched a few years before.

Though Hunter couldn’t read, he could recognise most of the letters, and especially the ones which were in his name.

“Riah darlin’, you is right clever.  I have the perfect place for this.”  With that he took the frame and placed it with pride of place above the mantelpiece. “There, now we can always see your letters and such like.”