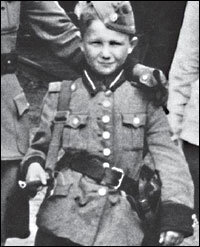 The trucks were gathered near the clock tower in Riga.  Entire families, men, women, and children, stood with the meagre belongings which they were allowed to carry awaiting their turn to board.  Some of the children were unsettled and began the fuss and cry.  A Latvian SS officer called over his unit’s mascot, a uniformed boy of less than ten.  He was given chocolates to distribute to the doomed children, with the intent of calming them.  What could be more comforting than another child sharing sweets?  The gesture worked and the “transportation” continued.

Based on a true event in Riga during the Holocaust.  While there is still uncertainty as to Alex Kurzem’s heritage, the fact remains that he was the mascot of Battalion 18 of the Latvian SS, and was later made a corporal.  He was also the subject of a Nazi propaganda film.

11 thoughts on “The Chocolate of Leime”