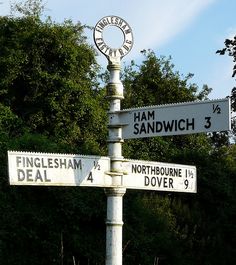 If one travels enough they are bound to come up with loads of tales for the grandchildren. Many amazing experiences await those intrepid enough to journey the world.  But there are those moments, when the traveler encounters the surreal.

Here are a few real life occurrences that have “enriched” my travels:

What’s In A Name?

There are a number of amazing place names about, and while there are some doozies, here are ones I have travelled to or through.  Pennsylvania has a junction where you can go to either Intercourse or Virginville. Fair enough, but the the mid-south has some interesting places too. Dolly Parton has made Pigeon Forge famous, and the name is fitting.  But how did anyone come up with Possum Trot, Kentucky or Bucksnort, Tennessee?  There is also the road in Kent, England which leads you to [a] “Ham, Sandwich, Deal.”

I was visiting Marrakesh and set off to find a tablecloth. My wife and I had admired one at a North African restaurant in England, so I was tasked with finding a similar one on my trip.  After checking several shops and stalls, I was told by a vendor, that his cousin had exactly what I had described.  So again a long walk through alleys and market stalls. When we arrived, the cousin indeed had a cloth very similar to what I sought.  The problem was it was rectangular and my table round.  When I pointed this out the cousin was quick off the mark.  He picked up a large pair of tailor’s shears and said, “Is okay, I will make it round.” I bought it as a rectangle.

Off the Beaten Track

My wife and daughter were on a trip to Turkey, and had a similar Souk experience. They had hired a taxi for the day, and the driver was taking them to “all the best places.” As they were in the market, they decided to buy a scarf. The “relative” of the driver didn’t have the desired colour, but assured them that yet another “cousin” would have it. So off through back streets, and alleys they went, to arrive at the back of a mall-like complex far from the main plaza. They entered rear doors and then a lift (elevator).  It was then that the guide smiled at them and said “And this is where we kidnap you Westerners.” Yes, a joke, but not before a moment of shocked silence passed did it sink in.

And Behind Door Number One

I was having a meal in a restaurant in rural Japan in the 1980s when there was “a call of nature.”  I excused myself from the table and found the doors suitably bearing the figures of a man and the other of a woman. On entering, it became immediately clear that both doors led into the same space which was laid out with Japanese benjo style toilets.  It was – despite the door markings – unisex.

One Size Fits All

This wasn’t my only “one size fits all” experience. I arrived at Lublin Airport in Poland and waited for disabled assistance. In time, a very rickety, lightweight wheelchair arrived. I am not a small boy by any stretch of the imagination, but was assured it was the right one for me (my impression being that it had to be, being the only one in the entire terminal) and so I was squeezed into it, only to feel every bump, door threshold, and grating the airport had to offer.

From absurd to the ridiculous, I was then told that the chair couldn’t go through security, so I would have to join the queue, and walk to the other side (20 minutes) where it would join me.

I guess that sets up to most embarrassing moment in my travels when I was staying at a hotel in Lisbon, Portugal. I went to breakfast on my first morning to find that all of the wooden tables and chairs were already occupied. I was pointed to an aluminum patio style seat to the side of the dining room. It looked a bit iffy, but I gave it a try.  The end result of course was its legs each going in its own direction and me finding a seat on the floor. Who says breakfast can’t be exciting?