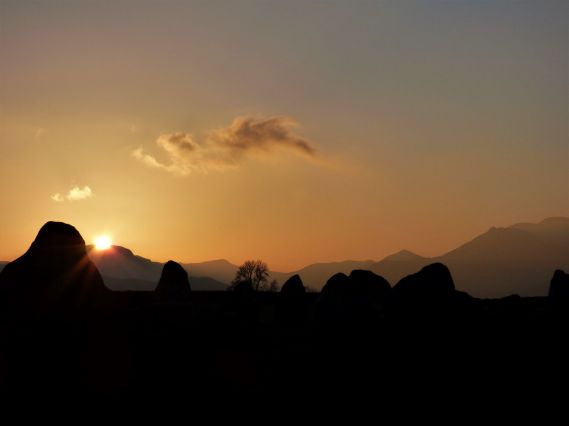 The mountains before them, with their high peaks, and white snow-caps looked forbidding. The foothills, however, were generally lightly forested, and the party was making good time. There were some groves which were more dense, and some of the small stream valleys were a tangle with undergrowth. These they endeavored to avoid, but there was still a sense that something was amiss. Both Breena and Maya picked up on it, using their respective gifts.

“We’re being stocked,” Maya told the others.

“Yes, and the White Ones say on two sides,” Breena added.

Seymour was on guard, shortly before dawn, when he heard a commotion in the small valley before them. He quickly roused the others, and they prepared for an onslaught which did not come.

Shortly after daybreak they proceeded to the watershed, and peered down.  There next to the stream bed, a scene of carnage greeted them.  Seymour led them downwards, and there they came across the body of man, which seemed to have crumpled where he had stood. He had a short black fletched bolt protruding from his left thigh, two more in his belly and right shoulder.  The death-blow however seemed to be from the fourth bolt which had struck his throat. Five others had struck trees or the ground around him.

Before him, starting from about thirty long paces away, lay the bodies of six Goblins, each with a slender red feathered arrow piercing its torso. Thilda looked at the remains of the creatures, and couldn’t help but be impressed with the skill of the archer who had brought them down.

She turned to look at the man. He was of medium height, but athletically built. Around his shoulders he wore the forest green cowl of The King’s Rangers. He was about fifty years of age, and had begun to grey at the temples. By his side was a quiver with six more red fletched shafts, and across his lap lay an exquisitely crafted composite bow of ewe wood and antler.

Thilda lifted the weapon, and was surprised at how light and easy to manoeuvre it was for its size. As she examined it, her eyes fell on an engraving in the antler work.  It was a stylised arrow running through a bow fashioned from a number three. It was capped with an “A” and fletched with a “F.” The makers’ mark of Augustus Feathermann the Third, her father. It must have been one of his finest pieces of work, though she had never seen another quite like it before.

She shouldered the bow, and exchanged quivers with the corpse and selected her five best white-feathered arrows from her old quiver as well. She then went to collect the remaining arrows from the Goblins’ bodies. Thilda Feathermann was now, more than ever, a force to be reckoned with. None of her sisters dared question her why she had tears in her eyes.

She was appreciative of this, but thought it prudent to state, “Damn pollen getting to me, Seymour,” before he had a chance to say a word.

Seymour dug a grave for the Ranger, and Breena said the appropriate words. At the same time Gwendolyn and Wilberta gathered wood, while Thilda kept watch. They built a pyre and Maya lit it with an incantation to dispose of the Goblin remains.

“Do you think that’s all of them?” Gwendolyn asked Maya.

“I’m not sure, but I know that the ranger had been one of our “stalkers,” and “the Goblins the other,” she replied.

“No exactly,” Breena interjected. “The Goblins were indeed stalking us , but the Ranger was stalking them in turn.”

All agreed and they set off to make the greatest distance from this place as they could before nightfall.

This tale is posted out of sequence, as it while vaguely plotted, been really enhanced by some outstanding prompts(Thank you Sue and Rag Tag). The Sisters Tales are presented in the correct order on the “Themed Fiction” page of my blog.

4 thoughts on “The Afbow: A Sisters Tale”