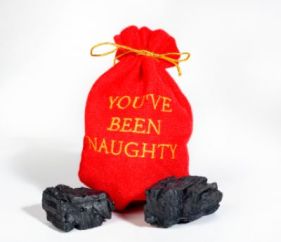 There was a recent news story here in the UK, that Nihal Arthanayake, the Radio 5 presenter gave his children lumps of coal on Christmas morning. His goal was to punish them for their bad behaviour.  His attempt at discipline backfired, however, with his children – and especially his son – being hurt and angry rather than repentant. In fact, his son threatened to write a letter to Santa Claus, giving a counter-rebuke for Santa being overweight. Arthanayake noted that, “My son is going to fat-shame Santa.”

Correcting someone is never easy.  It requires courage, tact, and most of all love. Some will accept it, others like the presenter’s son will strike out. Proverbs 10:17 notes,  “He is on the path of life who heeds instruction, But he who ignores reproof goes astray.”

So why try?  James 5:20  puts it clearly, “Let him know that whoever brings back a sinner from his wandering will save his soul from death and will cover a multitude of sins.” Which builds on Jesus’ teaching in  Matthew 18:15 “If your brother sins, go and show him his fault in private; if he listens to you, you have won your brother.”

Note here that the motivation is to save, not injure.  It is also best done privately (at least at first) in order to limit embarrassment.  John Henry Newman noted that this is a balancing act, “It is difficult to rebuke well; that is, at a right time, in a right spirit, and in a right manner.”

But timing aside, the spirit and manner are made clear in 1 Corinthians 16:14, “Let all that you do be done in love.”

What is our motivation when we feel compelled to admonish?  If it is for their benefit, and not our own, and we seek to do it it kindness and love, then it is a noble act. What is our approach?  If it is to regain a brother or a sister in love, then proceed.

Above all show love, and remember as well, that we too are flawed.