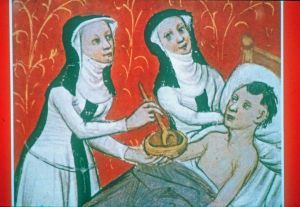 Angard lay doubled over in the bed.  Sweat glistened on his brow, and he moaned in agony.

“I think I am actually going to die this time,” the mighty warrior said.

“We shall see,” Angatha said placing a gentle hand upon his shoulder.

She could see the multiple battle scars across his sturdy frame.  How many times has this man known the pain of sword or arrow? she wondered.  Yet despite this history, he now lay almost inconsolable.

Angatha’s sister, Benora approached the bed and held a sweetened elixir to the champion’s lips.  He sipped it slowly, and closed his eyes.  Both sisters rubbed his shoulders and said almost in unison, “flos potentia.”

Within minutes the warrior opened his eyes and stretched.

“I feel so much better,” he announced. “What was that spell you uttered?” he asked.

“Spell?  There was no spell,” Benora said matter of factly.

“How am I healed then?” he challenged.

“The flowers, stupid.  There was chamomile in the tea,” Angatha mocked. “You ate too much mutton again, you idiot.”

Both of the sisters looked down at their brother and just shook their heads.