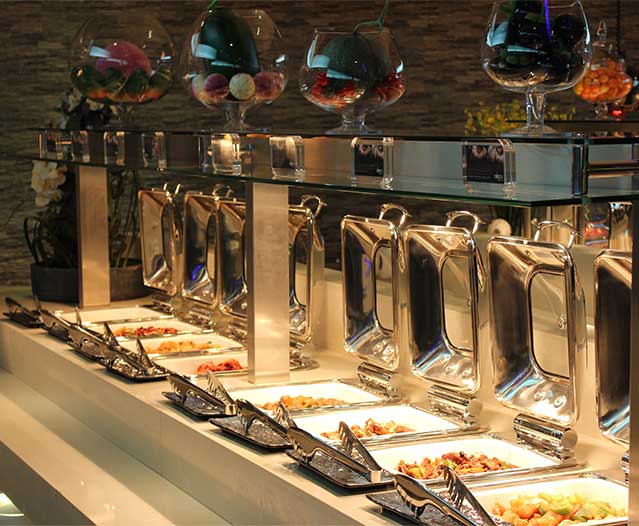 My step-daughter and I went to Nines International Buffet in Cambridge for lunch.  We have been eating irregular meals since my wife’s passing, and a good filling hot meal seemed a sensible thing to do.  So off we went to Nines.

The restaurant is on the upper level of the Cambridge Leisure Complex and easily accessible by escalator, and I believe there is a lift, though I did not spot it.

On arrival, payment is made at a desk at reception. There are also some soft chairs in a small waiting area for those expecting more members of their party. Once the buffet is paid for, you find a table in the main dining area. Shortly after sitting, a member of staff will come and offer drinks which are paid for separately from the buffet itself. There is an option for unlimited refill on Pepsi products.

The layout is a series of steam-tray stations along one wall and a long counter running to form a L shape which has “fresher” options, such a skewers and pizza. As we were there for lunch the sushi, skewers, and seafood were not operating, but the pizza, Chinese, and general buffet were.

The firm advertises Chinese, Indian, Japanese, and Seafood as main stations, and even on the general buffet there were some of each. I had crab claws which were a little more potato blend than I find at most places and they tasted more of general fishcake than of crab but they were still enjoyable. My daughter started with duck/pork pancake rolls which were self-serve. The starter area had many standard UK bits such as chips, onion rings, samosas, and the aforementioned crab claws. Sweet potato fries and cocktail sausages also were in this area. There were four pizzas laid out: pepperoni, chicken, Veggie, and a plain tomato cheese combo. The quality of the cheese was surprisingly good. Several of the Chinese and Thai dishes were very spiced, and a fish stew option left my lips tingling for quite some time. Desserts were a small assortment of rather basic quality cake, tinned fruit, and a soft serve ice cream machine.

There was an abundance of clean plates, and dirty plates were quickly bused from tables to give a pleasant eating atmosphere.

The food as a whole was tasty, and abundant. Quality was average to good, quantity outstanding, thus making the price a good value for money. As an eatery this is a four star (out of TripAdvisor five – not to be confused with Michelin [cue cheeky grin]) affair, but in like for like buffet places nearly a five.

There is a second Nines in Swansea, Wales as well.

One thought on “Eating Up to the Nines”